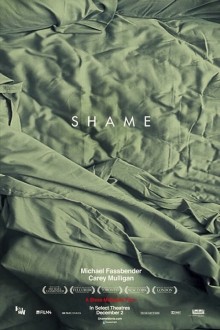 So I suppose it would be a three-way tie for "story of the week" this week. Depending on your level of interest, it was either Steve McQueen's Shame getting an NC-17 rating (what a silly rating), Joss Whedon making a secret movie of Shakespeare's Much Ado About Nothing, or, unfortunately, Lindsay Lohan agreeing to do Playboy about five years after drugs and hair dye made people actively not want to see her nude anymore. I suppose you could make an argument for Paranormal Activity 3's box office numbers, or Steven Spielberg's interview about Indiana Jones 4 too.

What an exceptionally boring week for film news.

Stacked on top of all of that, it is Halloween weekend and most people are only talking about horror films, which I don't have much of an interest in. Never really have, aside from the really good terror films (like The Exorcist and what have you). But I also don't like roller coasters or tall buildings, so you can make of that what you will.

-Martin Scorsese checks in with his top 11 scariest horror films.

-If you like horror-slasher-screamy movies, you probably don't want to read this article on why you like them.

-Abigail Breslin on Janie Jones, being in a band and her first movie kiss.

-Kal Penn on that time he killed himself on House to go work for the President.

-JB Smoove probably should be running the WME agency. And his first order of business should be to fire his sound guy.

-JB Smoove can't pronounce his name, and neither can I, but here is Drive director Nicolas Wendinghdf jreffnnn's Criterion top 10 list.

-Are we going to get a Grand Aaron Sorkin Biopic every year? Will Steve Jobs be the next one? Hopefully he'll be too busy with his HBO show.

-Empire Online has a bunch of Spielberg stuff in their new issue, including news of Jurassic Park 4, Indy 5 and a little in depth about Indy 4. He throws Lucas under the bus a little about the story and the aliens, but takes full credit (proudly so) for the disasters of the Gopher and Indy surviving a nuke in a fridge. I really, really thought the Gopher was Lucas.

-The first US poster for We Need to Talk about Kevin is also pretty weird, though not too bad if you know what it's about already.

-Here is the trailer for the latest Studio Ghibli film to be brought to the States by Disney, The Borrower Arrietty, which is apparently going to be called The Secret World of Arrietty in it's English-dubbed release.

-Chronicle, which appears to be a movie about stoners getting super powers from their weed and then misusing them. Silly stoners. It's just what we needed, though: another video camera POV movie. There sure haven't been enough of those lately.

-Finally, the NY Times has a piece on creating the Halloween Horror Nights at Universal.