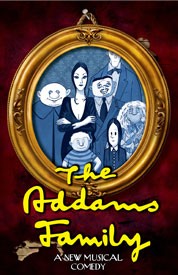 You spend your life trying to build a loving, stable home for your offspring. Then one day your adolescent announces that they've found the love of their life, and are bringing them and their parents home for dinner. But instead of basking in the parental genius that got them to this point, your brat insists that your long-established lifestyle is suddenly “abnormal” and “embarrassing,” and begs you to pretend to be someone you're not for the sake of impressing the new in-laws. Of course, it turns out that the beau's parents are just as peculiar in their own way, and by the end of the evening all seemingly-insurmountable differences have been forgiven in favor of inter-familial friendship.

If the above sounds suspiciously familiar, you may have seen the musical La Cage Aux Follies, the movie The Birdcage, or just about any second-rate sitcom from the past three decades. Or you may have just emerged from The Addams Family, the latest Fairwinds Broadway Across America touring production to park itself at Orlando's Bob Carr (now through Nov 6). Kicking off a 2011/2012 season stocked with revivals, The Addams Family is the freshest play to visit us, with the original production still performing in New York through this New Year's Eve. But despite it's recent vintage, there's nothing here you haven't seen or heard a hundred times before: cartoonist Charles Addam's eternally unconventional characters have sadly been shoehorned into the the most conventional and unimaginative musical in many years.

In fairness, the Addams Family cast and crew deserve a big hand (and not just the disembodied Thing, who made an all-too-brief cameo) for bringing as much energy as they could muster to this empty sack of a show. Their enthusiasm was especially impressive considering the adverse opening night circumstances: haze machines tripped the Bob Carr's antediluvian smoke detectors, evacuating the audience and delaying the curtain by over an hour, which prompted Florida Theatrical Association President Ron Legler to announce “this is why we need a new performing arts center.”

As the perverse patriarch, Douglas Sills (Broadway's The Scarlet Pimpernel) satisfyingly captures Gomez Addams' exuberant Iberian insanity, and Blake Hammond's Uncle Fester strikes just the right note of brain-damaged beatitude. But the crucial female characters have been so badly misinterpreted as to be almost unrecognizable from their iconic television and movie incarnations. As Morticia, Sara Gettelfinger has impressive Elvia decolatage, but none of the dreamy sensuality or casual cruelty Angelica Huston infused in the role; she seems less like an Addams than a Real Housewife of New York. And Cortney Wolfson's Wednesday must carry the threadbare plot, but she's lost all her signature snark (and pigtails), playing the part as a silly simpering teen instead of the deadpan cynic fans remember. Besides, anyone who saw the second film knows Wednesday's heart belongs with an equally-outcast nerdy Jew, not this generic gentile guyfriend (Brian Justice Crum).

So, the script by Jersey Boys scribes Marshall Brickman and Rick Elice is occasionally clever but mostly stillborn. Andrew Lippa's music manages to be both entirely unoriginal (quotes from Chicago, Wicked, and 42nd Street abound) and completely unmemorable – five minutes after the finale I couldn't hum a single chorus. Even the line-dance-centric choreography by Sergio Trujillo is sloppy and stiff, and not just when the cast dances the “rigor mortis”; the climactic masochistic tango between Gomez and Morticia is so sizzle-free, even Tom Lehrer wouldn't give a second look.

But if you look beyond the show's barren center, there's a lot of fun to be found around the edges. The set and costume designs by Julian Crouch & Phelim McDermott (the show's original directors, who were unceremoniously replaced by current king of cheesy crap Jerry Zaks) are appropriately atmospheric. Minor characters like Lurch (Tom Corbeil) and Cousin It are used in consistently cute ways, and Fester's second act ode to lunar love is a lovely gem of lunacy embedded in an hour of ennui. The best performance of the night may be delivered by the proscenium's rich red curtain, which slickly reconfigures itself from scene to scene; even its gold tassels get into the act. Much like Addams' original illustrations, which will still be read and remembered long after this misbegotten musical has faded into obscurity, the pleasure here is in the marginal details.