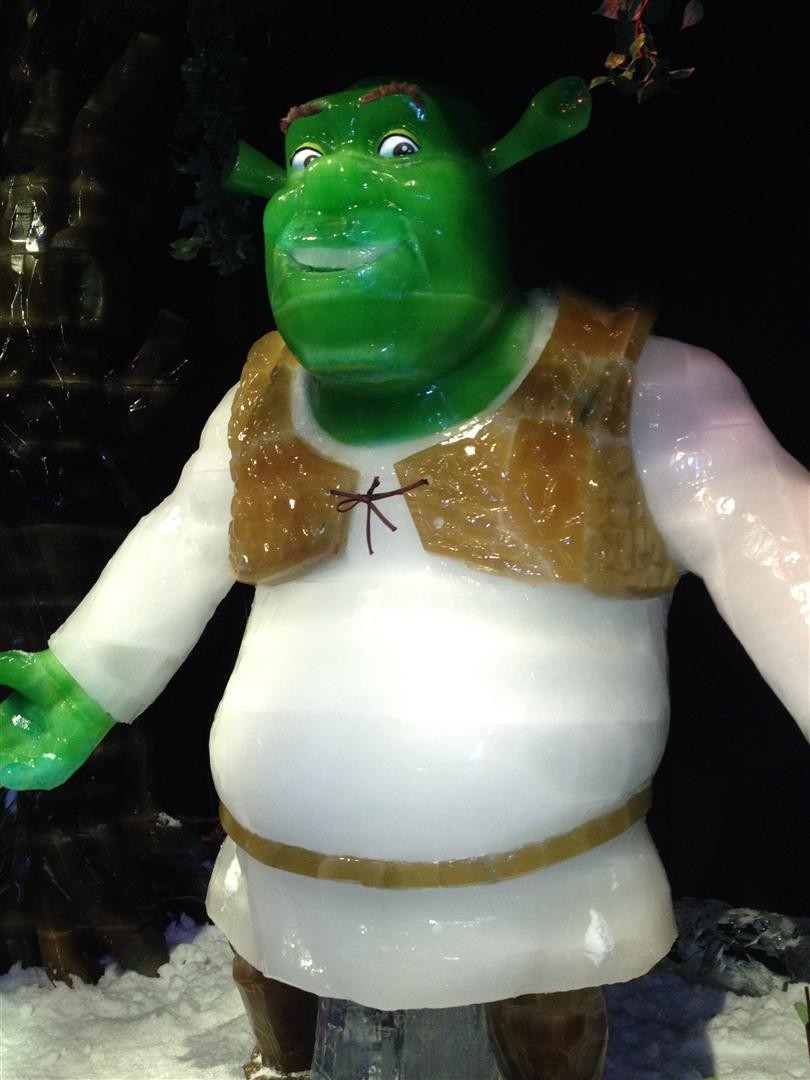 For transplanted Northerners like myself, it's hard to get in the seasonal spirit with daytime highs still in the low 80's.This weekend, the ginormous Gaylord Palms resort opens the latest edition of ICE!, a sure-fire -- or sure-frozen -- way to lower your core temperature in time for Christmas.

Each holiday season since 2003, the Gaylord Palms has pitched an ultra-air-conditioned tent behind their convention center, then set a team of artisans imported from Harbin China loose on 2 million pounds of ice. The result is a 10-minute walk through a wonderland of elaborate crystalline tableaus, kept solid at a brisk 9 degrees Farenheit (don't worry, parkas are supplied). Staples of the event include an ice slide (keep your elbows in!) and a detailed life-sized nativity scene.

The twist to this year's is a team-up with Dreamworks, who supply the "Shrek the Halls" theme, complete with photo-ops with your kid's favorite non-Pixar CGI cartoon characters. Questions about Christmas commercialization creep aside, the I thought the attraction has more charm and warmth (pun intended) than the last 2 Shrek films combined.

Also available (for an additional cost) as part of the Christmas at Gaylord Palms is Snow, a chilled playground of filled with man-made snow. The "Kung Fu Panda" theme doesn't extend to the off-the-shelf jungle gyms, and the hard-packed snow isn't much fun to fall on, but it's a fascinating new experience for Floridian children. Warning: don't try to ride the big slide wearing jeans -- friction is not your friend. There's also a 3-D theater showing the new Puss In Boots film, but it was not yet open during the media preview I attended. (You also won't get the free hot cocoa and cookies the press were provided with. Please don't hate me.)

Prices for the event, which runs daily through January 2nd, start around $20 and vary by day. See their website for details.