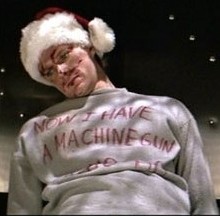 "Now I have a machine gun. HO - HO - HO." Wonderful words, aren't they? They burst at the seams with a jolly, pudding stuffed Christmas spirit perfection.

Thanksgiving is gone, finally, and so are all the leftovers. Christmas lights are beginning to go up, and next week so will the tree in Rockefeller Center. It's a joyous time for film fans because it means one thing: Oscar Fodder Time. It's not only the Christmas lights going up around town. It's also the Girl with the Dragon Tattoo posters, and War Horse billboards. Melancholia, Hugo, and My Week with Marilyn are out. Soon comes Shame and Sleeping Beauty. Then Tinker, Tailor, Soldier, Spy, Young Adult and We Need to Talk About Kevin. It truly is the best time of the year.

The bad thing? Hollywood basically shutters its doors between Thanksgiving and New Years, so there won't be much news to feast on unless Mel Gibson or David Hasselhoff want to get drunk again for our amusement.

-The new Netflix slogan: mo money, mo problems. It's a real shame what this company has done to itself in the last six months. (Deadline)

-Richard Brody talks about his experiences with Woody Allen films, including a Heywood sighting at Sam Woo's, which was immortalized in the list of things that make life worth living at the end of Manhattan. (It closed down in the 80s, I'm pretty sure.) (The New Yorker)

-I gotta say, I thought the ending of Before Sunset was such a lyrical, perfect place to leave Jessie and Celine that I have a big issue with the filmmakers (Richard Linklatter, Julie Delpy, Ethan Hawke) possibly ruining it with a third film. If you think about the ending, Jessie did (possibly) a kind of shitty thing. I don't want to see the wreckage of that, I want the little guitar waltz and Celine's Nina Simone booty shake. (Vulture)

-Speaking of Julie Delpy, she going to direct a Joe Strummer biopic. (Variety)

-The Selvege Yard has some photos from the set of American Graffiti. (The Selvedge Yard)

-Did Twilight: Breaking Dawn cause you to have a seizure too? Personally, I think those are the most sensible response (though I say this having only seen 40 minutes of the first movie). (The Wrap)

-Just in case you weren't sick of the Titanic 10 years ago, they're making a miniseries about it now. (Variety)

-Brace yourselves: someone did a study and discovered that girls in movies are usually sexy. We treats objects like women, man. (The Wrap)

-Apple has a making-of for My Week with Marilyn up. (Apple)