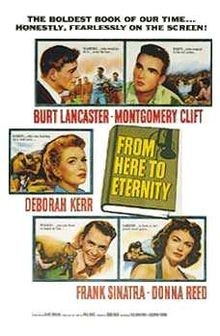 Instead, Turner Classic has a night of programming dedicated to Pearl Harbor, starting with Fred Zinneman's From Here to Eternity, about the fate of a group of soldiers in the weeks before Pearl Harbor changes everything. The film stars Burt Lancaster,  Montgomery Clift, Deborah Kerr, Donna Reed, and Frank Sinatra, who won an Oscar (and was allegedly the back story for Johnny Fontaine's war picture in The Godfather). If you've never seen it, it's so much more than the beach scene. Very highly recommended.

The night continues with Delmer Daves' Task Force and Bruce Humberstone's To the Shores of Tripoli before ending with John Ford's pacific war epic, They Were Expendable, starring John Wayne and Robert Montgomery.

I'm a little surprised they're not showing Gregg Toland's December 7th though.