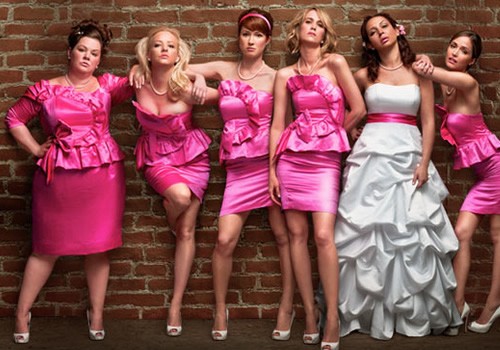 Like Rick Perry, I’m not a betting man, so I won’t venture a guess as to its chances. All I’ll say is that, if the movie does end up earning a little golden statue, I’m going to chalk it up as a victory for sexism.

Yeah, you read that right: “for,” not “against.” Because the whole narrative around Bridesmaids is starting to smack of paternalistic patronization.

Sure, it’s a funny movie. It’s generally well written and has a slew of memorable performances. Absolutely. I consider myself a fan.

(Want proof? My dear wife recently set me up with a chocolate cake that read “Happy Birthday, Stove” -- in honor of Kristen Wiig’s classic airplane freak-out. That’s how you measure a four-quadrant picture, folks.)

But I’m getting a little leery of the “pat on the head” element of the plaudits the picture continues to receive. The more Wiig and her partners go on record with the wholly sensible argument that Bridesmaids should be evaluated like any other comedy, the clearer it becomes that the editorial subtext of most of the attention they’re getting is still “How cute! You made a movie!”

The Daily Beast’s article about the film’s supposed Oscar buzz is hardly innocent of this: Producer Judd Apatow gets to go on record touting his wisdom in having forced the female writers and cast members to indulge in occasional gross-out humor; meanwhile, unnamed “sources close to the production” (read: gossiping harpies!) tell how reluctant the women were to stoop to that level.

Oh, those silly, shortsighted ninnies. But guess what? They were right. No matter how much bank the movie made from its few but marketable detours into bodily-function humor -- netting it the blessing/curse tag “a female Hangover” -- those vignettes were out of character and unnecessary. Bridesmaids is simply a funny, sweet, insightful story about friendship and learning when it’s time to make a change in your life. Vomit really doesn’t have a place in that. Which means that, of the twin qualms attributed to those mysterious sources -- “This is not what happens to women. That’s not what kind of movie this is” -- the latter is the most compelling.

So I guess that brings me back to why I don’t want to see Bridesmaids win anything of value at the Academy Awards: It’s just not quite good enough. At the end of the day, it’s a fun, enjoyable movie with some unfortunate and highly visible flaws. No more, no less. And implying more is saying that it deserves special dispensation because it’s about and/or for women -- which is the very idea that Wiig et al. have been pushing back against, hard.

Understand: It’s not easy for me to make any sort of “reverse discrimination” argument. For the most part, I find it curious that the people who tend to get up in arms about reverse discrimination are the same people who obviously don’t give a crap (in the street or otherwise) about actual discrimination. So I know how spurious it sounds to suggest that Bridesmaids might deserve at least a screenwriting Oscar in a world where comedies don’t ordinarily receive such things -- but that, since we don’t live in that world, there’s no reason that this be the film that breaks the mold. If I point out that The Hangover itself didn’t win any Academy statues, am I actually suggesting that the fellas should always go first? Will you the reader understand that all I mean to say is that someone else shouldn’t go first simply because she’s not a fella?

And to what degree does Bridesmaids even deserve such a symbolic win, since it was actually directed and produced by men? (Men who, as I pointed out, seem to be inordinately responsible for its missteps?) Does that make it just a regular movie that might end up getting an unfair advantage due to demographics its own creators are trying to downplay? Or does the very fact that they have to downplay those demographics mean that any Oscar love they netted would be as inseparable from its cultural context as were Halle Berry’s 2002 Best Actress award and Kathryn Bigelow’s 2010 Best Director win?

Honestly, the whole thing makes my head hurt. Maybe I should just take a few painkillers, have a drink and remind myself of the few things I know for sure: We shouldn’t have to be arguing all this civil-rights stuff, because it’s the '90s. And anyway, I can’t hope to be truly objective about this -- not as long as I have a gender and some personal tastes. At the end of the day, I’m not an arts-evaluating robot. I’m a man, and my name is Steve.

(NOTE: The author is not a flight attendant.)