Victor Herbert's 1903 operetta Babes in Toyland has a rich history over the last century; initially commissioned to capitalize on the Wizard of Oz craze at the turn of the century, the story of a magical world of fairy-tale and nursery-rhyme citizens ruled by the evil Barnaby first opened at the Grand Opera House in Chicago and has since been adapted, co-opted and retold by Laurel and Hardy, puppets, Walt Disney and MGM. But none of these adaptations can compare in pure WTF insanity to a 1986 TV movie that's still only available on VHS ... or so I thought. Turns out – as is the case with almost anything these days – some enterprising gentleman transferred one of their tapes to the glorious YouTube, where it can be appreciated by anyone with an hour to kill and Valium at the ready. Eleven-year-old (and early-Little-Girl-Lost phase) Drew Barrymore stars as Lisa Piper, a girl so busy caring for her family (which we see exactly 2 minutes of at the very beginning) that she doesn't really care for toys. Her sister works in customer service at a local mart managed by the inappropriately flirty Richard Mulligan. He loathes that the sister (who, in Toyland, is Mary Contrary) has the hots for "the skinny stock boy with his finger in the till" Jack Fenton/Be-Nimble, played by Keanu Reeves. Driving home during a blizzard, happily singing an upbeat song about Cincinnati, of all places, they hit a bump and Lisa goes flying out the back, where she stumbles into Toyland. I'll give you a minute to process that paragraph. You good? All right. So Lisa nonchalantly accepts her new destination, and is brought up to speed by Georgie Porgie, who looks like pre-weight-loss Jonah Hill: Barnaby Barnicle (Mulligan) owns a dominating amount of land in Toyland, lives with his minions and omnipotent Fraggle creature in a bowling-ball-shaped house that he sometimes uses to demolish the village when bitches act up.

He's set to marry Mary Contrary, due to some nonsense about deeds and Jack-Be-Nimble's dad. Lisa speaks up and stops the wedding, claiming that Mary actually loves Jack. This sets off an epic battle involving woodland creatures, a toymaker played by Pat Morita and a climactic battle royale with buggy cars. 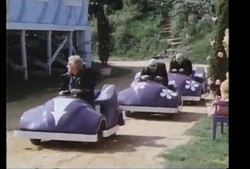 Again, I state for the record, I am not currently under the influence of hallucinogens. This happened. [youtube 62DGe9i9lGQ&feature=related] All the players seem to know they're in a doomed production and they give it a good 80% effort throughout, especially Mulligan. And there are things to enjoy here. Besides a couple of Herbert's original compositions, pretty decent, forgotten holiday tunes abound (yes, even "Cincinnati" is perfectly hummable). These songs were written by Leslie Bricusse, whose impressive resume includes Victor/Victoria and Willa Wonka & the Chocolate Factory. The screenplay is by Paul Zindel, a co-writer on Mame starring Lucille Ball. So there's a very credible musical undercurrent at work here. Too bad the production values, Barrymore's blank performance and absurd touches really enhance the shoddy, B-nature of the movie. Still, I can't say it's not fun to watch Reeves developing his surfer-bro, innocent heartthrob persona so early on. I say since we're at the appetizer portion of the 12 days of Christmas (13?), give the first segment a go and see if you can stick with it through some buffering. [youtube HE53AzMZie4]