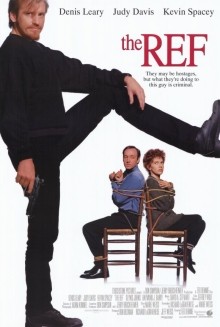 Once again, we find our story beginning  on Christmas eve as jewelry is stolen from the rich, but what was a beautiful dame purloining a single bracelet in Mitchell Leisen's Remember the Night becomes a home burglary by a surly, black-clad, Van Dyke-sporting Denis Leary in Ted Demme's Christmas caper film. In it, Kevin Spacey and Judy Davis player Lloyd and Caroline Chasseur, warring suburban Connecticut spouses whose marriage is long past the sell-by date. After Gus's (Leary) big score goes sour when he gets greedy and ends up tripping the alarm, he takes Lloyd and Caroline -- and eventually their son Jesse (Robert J. Steinmiller Jr.), a young criminal learning the baby steps by blackmailing the principal of his military school -- hostage so he can hide out in their house, avoiding the town curfew and manhunt, until he can make contact with his getaway man, who sped off when he heard the alarm. Leary is at his madcap best here, ranting and raving through this Christmas kidnapping adventure, yelling all the things at the bickering Chasseurs that we're thinking, only better, funnier. Gus is a blue collar Boston guy who could never manager to get ahead. The only talent that he ever nurtured was a skill at thievery, which he seems to be good at, if irresponsible with the fence money. There does seem to be a bit more to Gus than the surface introduction we get to him provides. There is an intriguing moment when he comments on a painting hanging by the Chasseur staircase. He identifies it right away as a Chagall, and gets rightly pissed off that Caroline doesn't appreciate the treasure hanging on her wall. You're never quite sure, though, if he knows Chagall because of a frustrated artistic past, or because he was involved in an art heist (like the heist at the Isabella Stewart Gardner Museum in Boston in 1990).

In Lloyd, we find the seeds of Lester Burnham being planted in this walking corpse of a man whose life of quiet desperation is punctuated by the financial neutering by his excessively wealthy, excessively overbearing mother, Rose (Glynis Johns), and the emotional neutering by Caroline, who is fed-up with the situation their lives find them in, which she thinks he caused. Llyod is hardly innocent in this quagmire, of course. Their vanishing point goes back to the early 80s when they ran an Italian restaurant together in New York that Lloyd hastily decided to close down after a single bad review, something that caused Caroline to lose all of her respect for him. They got the money to open the restaurant from Rose, who has been squeezing them dry on the vig ever since. Rose has the whole family on tenterhooks, as we see when she shows up for Christmas dinner with dopey Gary (Adam LeFevre), her other son, his controlling wife, Connie (Christine Baranski, who is wonderful as that waspy mother that you want to punch in the face), and their spoiled kids (Ellie Raab & Phillip Nicoll). You can almost see Leary's eye twitching as he wades through this miserable night with this miserable family, pretending to be Lloyd and Caroline's Therapist, Dr. Wong, as to not cause suspicion until he can finally make his break for it. Of course, nothing goes smoothly, and after Caroline and Lloyd have a cathartic bust up in front of the family, Gus is found out by Rose, whose meanie spirit and chastising has managed to bring Lloyd and Caroline, and even Jesse, around to Gus's side. If you're looking for heart and oozing sap, you won't find any here. Any shred of a cheerful, hopeful ending is shrouded by a deep forest of Denis Leary the cynic, getting the aggression that had been building up for 35 Christmases out of his system. It seems to be his goal to beat up Christmas in this movie, and it's very welcomed to do so. It's the same aggression most of us have built up over the years but swallowed down with our egg nog. We wouldn't be half as funny as Leary anyway. By the way, according to my rudimentary finger measuring, Denis Leary's left leg is about a foot longer than his right leg on the poster. Good job, designers. [youtube 5yMi4qtUfOM]