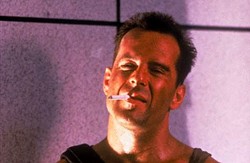 *Originally published in Orlando Weekly Holiday Guide 2010* (So we cheated, sue us.) I love Christmas. My wife and kids really love it, and at the risk of chest puffery, we’ve gotten pretty good at delivering the fairy dust. Not that we always come by it the same way as other households. You’re far more likely to hear Run-D.M.C.’s “Christmas in Hollis” or James Brown’s “Go Power at Christmas Time” at the Strouts’ than anything by Bing Crosby. You won’t find us at church but you will at Parliament House for their annual xmas show, and my sister and I have a years-running contest to see who can get the other the most extravagantly awful gift. But the most seemingly subversive of our traditions – though I can’t understand why more people don’t get in on it – is our Christmas Eve gift-wrapping, magic-making indulgence: Die Hard. Die Hard isn’t just the best action movie ever made, it’s the best Christmas movie ever made. The film opens with almost exactly two minutes of effortlessly transmitted, densely packed exposition in which we learn the following: John McClane (Bruce Willis) is on an airplane and ?nervous, both about flying and the plane’s recently arrived-at destination; a passenger suggests he take off his shoes and make “balled-up fists with your toes” when he gets where he’s going, which will come into play much later in a big way; McClane has been a cop for 11 years and is carrying a gun; he’s a flirt; he has a big teddy bear with a bow on it in the overhead compartment; and finally, it’s Christmas, signaled by the sleigh-bell jingling that morphs into the score. Cue title and let’s go. By the time McClane and his chauffeur are on their way to the ill-fated Nakatomi Corp. building – itself a cute, self-contained two-person scene soundtracked by, what else, “Christmas in Hollis” – my kids’ presents are splayed out, wrapping supplies are in hand and more than a little liquor has been poured as the little ones are nestled all snug, etc. As we build the next morning’s wake-up scene, we marvel anew at Die Hard’s revelatory complexity.

At heart, Die Hard is about a cynical, smirking New York cop attempting to win back the heart of his estranged, newly upscale L.A. wife who breaks McClane’s heart by going by her maiden name. Of course, most people think of gunfire and explosions when they think of Die Hard – and those are thrilling, even today – but there isn’t a single subplot that doesn’t pay off huge: cowboys vs. Europeans (Slate once called “Yippee Ki Yay, motherfucker,” “The greatest one-liner in movie history”); the gun-shy, guilt-ridden, sole friend to McClane, Al Powell (pronounced “Al Pal”), who fires the shot that killed the last baddie; McClane’s New York grit vs. the self-destructive FBI flash (personified by two special agents both named “Johnson”); and of course the increasingly elaborate, brilliant plan on the part of the villains (Alan Rickman puts on a showcase as Hans Gruber) that reveals their status as thieves, not terrorists as they want the world to believe. (Though their methods are terrorism of the highest order.) If there’s a better moment in moviedom than when Willis’ McClane dispatches a bullet-riddled thug down the elevator with a message for Gruber written in blood – “Now I have a machine gun. Ho ho ho.” – I haven’t seen it. By the time Bruce Willis, a nervous flyer, remember, catapults himself from the top of Nakatomi’s skyscraper, Mr. and Mrs. Claus are tipsy and yelling “Hell yeah!” at the TV screen, a holiday-themed massacre of paper littering the floor. It ain’t pretty, but it is magical.