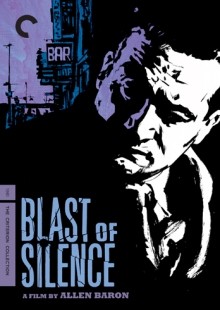 It's a few days before Christmas as Frankie Bono (Allen Barron) arrives in New York on some special business. He arrives by train, born through the darkness of Penn Station's arrival tunnel as simply "Cleveland" to the business partners he has come to meet. They don't need to know his name, and he doesn't need to know theirs. Neither wants to know, because their business is murder.

The timing is coincidental, but New York is at its busiest during the holiday season, so it affords a man who wishes not to be seen even more anonymity on theory. Frankie hates Christmas, and tries to draw some of that feeling into the building tide of hate that he needs to build up in order to carry out the hit he's been hired to do.

Troiano (Peter Clune), who he has been hired to kill, is a middling syndicate boss who has been getting in the way of his rivals lately. Frankie doesn't care about that either. It's just a job, one that pays, he notes, enough to put him in the top tax bracket, able to afford the kind of big, showy suburban house and life that Troiano enjoys.

But for man who hates Christmas, he sure has a way of letting it get in his way. While he is waiting for the gun he's purchased from the creepy, lowlife, rat loving Big Ralph to be delivered, Frank strolls along the glow of Fifth Avenue to a chorus of Silent Night. He passes the made up window displays and the tree in Rockefeller Center. If nothing else, the picture offers a brilliant display of what Old New York was like, Harlem and Midtown, the bridges and roads, the old skyline, the grit and grime that went hand in hand with the glitter and gold, men when they were still men. But the film offers plenty more anyway, the sightseeing is just a bonus.

Though it was made in 1961, there is a large parallel to be drawn with another New York mob boss, Paul Castellano, who had all the same problems as Troiano, and ultimately ended up in the same bloody heap on the ground. Baron, who grew up in Brooklyn in the 40s and 50s, probably knew a lot of these guys, back when it actually was like the first act of Goodfellas.

When Frankie ducks into a Midtown bar for a drink to pass the time after window shopping, he runs into an old friend he grew up with in the orphanage, Petey (Danny Meehan), and his sister Lori (Molly McCarthy), who Frankie had a crush on back then. Against his better judgement, he shows up when they invite him to a Christmas party, and the old feelings push their way to the top, no matter what the Narrator (Lionel Stander) says to try and convince him to remember what he's actually in New York for.

There is a deep, choking violence in the gruff, relentless voice of Lionel Stander's, whose narration (written by Waldo Salt) acts almost in the role of hypnotist, goading Cleveland along the path to murder when his instincts seem to be telling him to pull out, whenever Baby Frankie and his old crush threaten to ruin everything.

It's always been a curious thing to me that hit men come from somewhere, that they don't just accumulate one day with a silenced .45 in their hand and the knowledge to use it. But hit men were little kids, once, and had best friends with sisters they wanted to marry and have babies with. They lost peanut pushing contests, and in Frankie's case was probably beaten by the pre-Vatican II nuns in the Orphanage. Like Baron, I grew up in Brooklyn with a lot of kids that, when I think of it now, seemed to have very little conscience to their being, especially the altar boys, who were a special breed of disconnected, thieving, fighting hoodlums -- probably because they couldn't sleep in on Sundays like the rest of us. I kid, I kid. Frankie has that disconnect, and more, to be able to kill, or try to take advantage of Lori, who invites him over for a quiet dinner so he isn't alone on Christmas. Baron is not that world's most gifted actor, but through the world he creates as director -- the tight, squeezed in darkness that blots out much of the landscape, the angles, the low camera -- he is wired right into the character of Frankie and brings us along. The Narrator seems to be speaking to us as much as Frankie.

There turns out to be little need for that Devil's Advocate, though, when Frankie finds out that Lori already has a boyfriend -- that she was stringing him along, in his point of view -- and that pool of hate that he needs starts to spill over the brim, and it has Troiano's name written on it.

The finale, filmed during an actual hurricane that hit Long Island in 1960, is a brilliant piece of noir filmmaking. Francis Ford Coppola always says "if there is weather, shoot the weather", and this is why (even though, again, this film pre-dates my thoughts by a few decades). It lends such a surreal aura to the picture, something that million dollar Hollywood films could never achieve even with the best effects men. Thank God Baron only had twenty grand to shoot it.