December 30, 2011 at 5:06 PM
comment
It isn’t every day I have much good to say about a proposal endorsed by both Google and Facebook, but I ABSOLUTELY LOVE THIS. 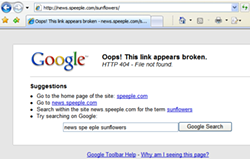 The prospect of a sudden blackout of some of the world’s most used -- some would say “necessary” -- sites makes me tingle in a whole bunch of places (some of which I had almost forgotten I had). The free-speech advocate in me loves the idea of delivering a crippling blow to Big Media’s twisted conception of “intellectual property.” The labor-lefty component of my psyche is, of course, always up for a strike of any kind. And as for the mental image of an entire planet abruptly cut off from the high-speed shortcuts and creature comforts they’ve taken for granted for almost a generation now -- well, that’s just about the most romantic doomsday scenario my inner adolescent has been presented with since Snake Plissken impetuously brought about Armageddon at the end of Escape From New York. Let’s start some fires!!

Let me be clear here: I’m hardly indifferent to the scourge of piracy. Heck, back in the day, I was probably the only American under the age of 40 who sided with Lars Ulrich and not Shawn Fanning. Because illegal copying doesn’t just hurt a bunch of millionaires who won’t notice a few missing download fees here or there -- it can mean life or death to struggling artists who need (not to mention deserve) every cent their work can net them. Information may want to be free, but DJ Underground Whoever gotta eat.

What I have a problem with is megabillion-dollar entertainment conglomerates wrapping themselves in the cloak of creators’ rights, especially when they’re more than willing to flush individual speech down the crapper to protect their business interests. Nobody knows more about stealing residuals from their rightful holders than do the likes of Time-Warner: They have entire teams of lawyers devoted to just that purpose. And as observers far smarter than me have pointed out, the Stop Online Piracy Act goes way too far, preserving commercial “fairness” at the expense of an Internet where the only speech that’s allowed has been preapproved by eight interested multinationals.

So when I see a bunch of PSAs linking bootleg copies of Rango to the Asian sex trade, my instinct isn’t exactly to weep in empathy. It’s to wonder if the concerned parties would sell me out as quickly as they do the powerless “creatives” who actually whip up their stuff for them.

That’s why I’m totally down with the blackout. I’d gladly give up access to Google, Facebook, Amazon and the like for an unspecified period, just to ensure that I wouldn’t later have to pay damages to CBS every time I alluded to the previous night’s episode of The Big Bang Theory in a status update.

The sacrifice wouldn’t be painless, I know: Like many Americans, I work entirely on the Internet, so even a day’s inability to do a decent search would cost me big time. But you can bet your bottom Amazon gift card that the service interruption would be short-lived. As soon as it sank in that nobody could go to Wikipedia to research that term paper on the Panama Canal (the phrase “What’s a library?” reverberating throughout households all across this great land), the phone lines to your elected representative would be glowing red hot. Suddenly, everybody would know what SOPA was about, and why it needs to be killed ASAP.

My guess? The whole process would take about 45 minutes. SOPA would be dead as soon as the senior members of the Senate could be brought up to speed on which tubes were down. Maybe it would only take half an hour, if some wise congressional aide led with the key detail that traffic to 2012 campaign sites was getting futzed with, too.

CNET’s Declan McCullough raises the possibility that this so-called “nuclear option” could provoke “retributions”; he means from Congress, although there’s always a chance that the no-information voters among us would simply blame the site owners directly for taking their toy away. But really, how realistic is that? Remember when you were going to boycott your cable provider for threatening to yank FOX from its lineup two hours before the Big Game? Good times. Lasted until about the second quarter, as I recall.

Besides, you only have to know late 20th-century history to understand how hysterical the entertainment industry can get over the specter of lost profits, and how much they’re willing to risk in the bargain.

To wit: Back in the 1980s, the major American record labels were certain that the consumer’s ability to make and trade cassette copies of his favorite albums was decimating the sales of recorded music. I can vividly recall buying a record and slitting open the shrink wrap, only to find that the entire inner sleeve consisted of an illustration of a skull and crossbones -- with a cassette tape as the “head” -- accompanied by the legend “Home Taping is Killing Music.” (Yes, kids, this actually happened. We also wore leg warmers.)

To stanch that supposed bleeding, the labels wanted Congress to impose a tax on the sale of every blank tape. They were so focused on that agenda that they did nothing to fight back when some grandstanding politicos -- with their heavily aerobicized wives as proxies -- conducted hearings into the supposed epidemic of X-rated lyrics, culminating in the creation of a “voluntary” warning sticker that would be placed on all potentially objectionable recordings.

The upshot of this “win-win” scenario? Albums that earned the sticker were rejected for sale by WalMart and other “wholesome” chain retailers, thus stunting the artists’ freedom of expression, slashing into their profits and robbing the consumer of his ability to make choices within an alleged free-market economy. Meanwhile, Congress -- which, you may have noticed, conducts its business significantly less honorably than the Gambino family -- rejected the tape tax anyway. And as a pathetic postscript, a few years later, study results quietly surfaced showing that the purchase of blank tapes actually increased album sales: People who received taped albums from friends were more likely to seek out the genuine, commercially available article.

When you’ve lived to see that sort of self-flagellating tableau play itself out, you learn to ignore the entertainment industry whenever it goes into one of its patented Chicken Little routines. You begin to notice that this tends to happen in and around big election years. And you thank your lucky stars that you now live in a world in which the free dissemination of information -- information that’s a bit weightier than who’s wearing whom to the Grammys -- has become too big to fail.

Bring on the blackout. It’s going to be the defining quick bathroom break of our lives.