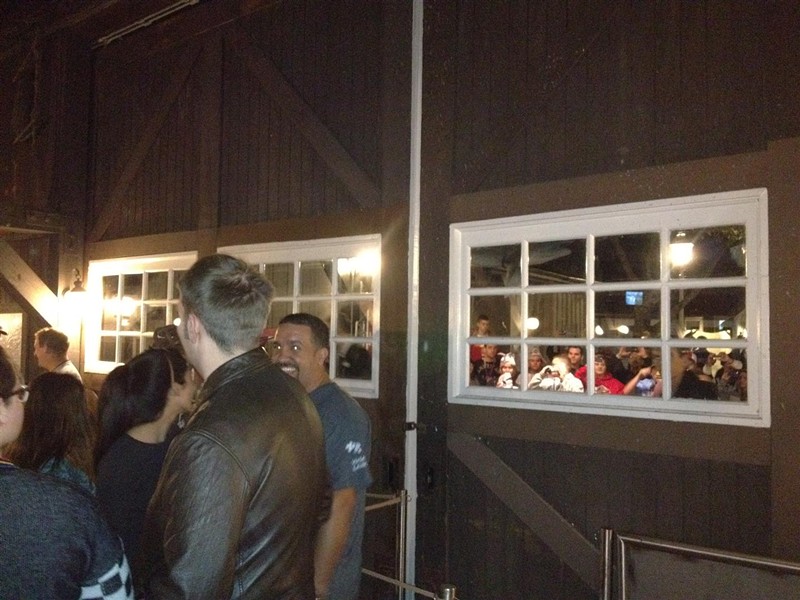 At 8 p.m. on 1/2/2012, an icon of Central Florida's attractions industry was unceremoniously euthanized, as Universal permanently shuttered their JAWS! boat ride. I covered the closing of the "mistake on the lake," and the final reunion of the ride original "skipper" employees, here and here. But I couldn't miss being there until the bitter end, and apparently I was not alone. Hundreds of fans turned out on Monday night, building a  60-plus-minute queue in the ride's final hours. Universal planned no closing festivities, and even turned down journalists who wanted to broadcast Jaws' departure. But fans turned out en masse, spontaneously leading chants and cheers in the shark's honor until well past closing time, when security finally ushered us away. I had hoped to be on the very last group of guests ever allowed on the ride, but seats on the official "last boat" were distributed earlier in the day by an unannounced, inconsistent system that I (and many other frustrated guests) missed out on. Even the ride employees had no idea how the last riders were selected; at similar closings elsewhere last rides have been successfully auctioned for charity, so this seemed like another lost opportunity. The best I could do was be the last guest ever allowed into Jaws through the "Universal Express" entrance. Seconds after I stepped into the queue, the giant entrance doors were slid shut forever (without any speeches or fanfare). I ended up on one of the last half-dozen trips of the night, only a handful of groups ahead of the official last group,  on a boat with theme park blogger Banks Lee and other members of the Orlando Attractions Magazine staff. You may wonder why I'd go through such trouble for a ride based on a 37-year old franchise that even supporters admit is troublesome maintenance-wise and past its pop-culture prime. When I started as a Universal entertainment employee back in 1996, I frequently spent my lunch hours repeatedly riding my favorite attractions -- Kongfrontation, Back to the Future, and (most of all) Jaws, where I daydreamed about being one of the super-cool spieling skippers, shooting grenades and shocking sharks every five minutes. All those rides are now gone, along with every other opening-day attraction at Universal with the exception of E.T. Apparently I'm not alone in forming an emotional attachment with Bruce the plastic Great White, because there wasn't a dry eye in my final boat -- especially our Skipper Kayla, who you can watch in the video below breaking down emotionally as she completes her last tour ever. As we disembarked, a huge crowd of fans stood at the exit singing "Show me the way to go home" from the film and flashing final pictures. Time moves on, and Jaws (along with the entire "4th of July" themed Amity section surrounding it, is now closed for redevelopment. Universal refuses to confirm future plans, but Robert Niles at Theme Park Insider gave fans a New Year's gift by detailing leaked plans for a huge new London-based Harry Potter expansion. The new Wizarding world (which has no opening date yet) will incorporate locations from Diagon Alley, including a large restaurant likely called the Leaky Cauldron, with a new state-of-the-art Gringotts Bank dark ride. The new headliner attraction will blend an indoor roller-coaster with motion simulation and 3-D visuals, probably utilizing sophisticated patented effects like a "punch-through waterfall" and "motion base ride track" that I revealed in an OW column way back in 2008. The wildcard of the new development is a rumored Hogwarts Express train ride that will take guests holding 2-park passes backstage from the new area to the original Potterworld in Islands of Adventure. Goodbye, Bruce -- sleep well, and dream of eating tourists. After all these years, it's finally July 5th... Here is a film of my final voyage: [youtube j9-1x7jRVHE] And here is a video from Orlando Attractions Magazine's Matt Roseboom documenting the official last boat: