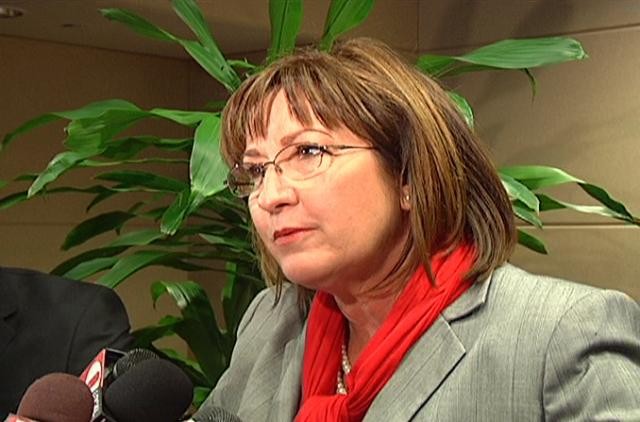 OK, SO HERE'S THE SKINNY. In an effort to preempt tonight's scheduled Town Hall at The Center on Orange County Mayor Teresa Jacobs possibly "wavering" on the idea of following through with the city's domestic partnership registry (which goes into effect on Thursday), Jacobs held an impromptu press briefing in her fifth floor conference room this afternoon to basically say that she will not be going through with a registry as we know it. She may not have directly said so – she didn't say very much directly except that she "is a mom" so she knows problems sometimes – but it was clear that Jacobs has no intentions of actually codifying gay relationships at the county level. Oh, she talked and talked, as you do, but when it got down to the core, Jacobs' stance is not unlike that of John Stemberger of the Florida Family Policy Council, who last year said that he would accept a registry as long as it didn't create a "special class" of gay people living above (within?) the law. What did Jacobs say? That the city's registry was "too narrow" in that it didn't include people that you don't live with. So, basically, she wants to devise a form that will be available on the county website that residents can download, fill out and keep with them; also, they'll be registered in a county database (just like city domestic partners, only without the "official" part) that hospitals can access should they need to see just who a patient wants to speak for them or be in the room with them. Sound fair?

Not really. For more than a year, gay advocates have been pressuring Mayor Jacobs on the issue. There are a number of domestic partnership registries in the state that operate without issues, so why not Orange County? Jacobs thinks the city's plan is too narrow (codespeak for "why can't we marry our dogs?"). She thinks there are "state laws that we cannot violate." Meaning, say, 2008's Amendment 2 banning gay marriage, which she voted in favor of. It's a real mess. Also, it's over. She's not going to be swayed.

When reached for comment, Equality Florida field director Joe Saunders pointed out that these statements of beneficiaries, like the one Jacobs is proposing, do not include children of couples in the cases of one parent dying, nor are they really enforceable. They're also boilerplate and virtually meaningless. We asked Jacobs about that, and her solution was that we "should sue." Nobody was kidding themselves that this whole move toward a domestic partnership registry was a gay rights issue. Nobody except maybe Teresa Jacobs. We'll have much more on this issue in our January 12 issue (out Wednesday in print), but suffice to say, this is not good news.

Your feast of scraps just got a lot smaller.