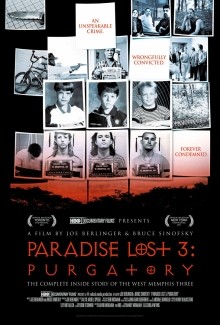 Ah, once more to HBO for a West Memphis 3 documentary.

Are they guilty? Are they innocent? I have no idea. Either way, the story is such a screwed up miscarriage of justice that it's kind of beyond belief. If they're guilty, they're out now. If they're innocent, they spent more than a decade in jail. If I recall correctly, they're guilty plea stands, so there will not be any further investigation, or arrests.

Now you can relive the whole unsettling affair, with all three Paradise Lost films in one night, as the first two volumes air right after Purgatory's premiere at 9pm.