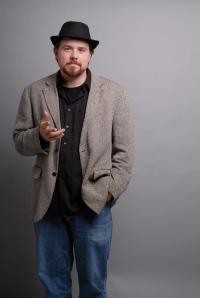 Last night, Beth Marshall Presents kicked off the 2012 leg of their company's current season at Orlando Shakes with Paul Strickland's new one-man show Add Songs, Stir. If you go expecting more of the clever observational stand-up comedy that made Paul's Orlando Fringe shows A Brighter Shade of Blue and Any Title That Works big hits, you are in for a surprise. Strickland's latest work has an eerie, ambiguous tone completely unlike his earlier shows, which left me admiring his talents but oddly unsettled.

A lakeless town builds a glass-bottom boat, then creates a flooded fake city filled with moving mannequins for tourists to float above. A man unintentionally commits suicide while trying to tear out his own beard. A woman falls desperately in love with her living room window. These, and a handful of equally unconventional anecdotes, swirl around together in a fragmentary stew of tangentially-related topics. Between monologues, Strickland is plagued by a ghostly recording of his own words, which he dispels by playing a half-dozen songs – 3 of which are witty originals – displaying dexterous fingering and an unexpectedly fine high tenor (though the falsetto sometimes starts to slip away from him).

At one point, Paul references “an evening of seemingly meaningful words,” and while the literal intent of this work can be difficult to tease out, the meaningfulness of his intensity is unmistakable. It's clearly a work-in-progress that could stand some shaping (there needs to be a clearer climax to the emotional arc) but it's exciting to see Strickland stretch beyond his comedy comfort zone into a more personal space.

[Edit: This article was originally posted with an incorrect show title in the headline (though it was correct in the body). Oops!]