January 28, 2012 at 4:24 PM
comment
Hey, see the title of this blog? It means we’re going deep into rumor and speculation about the arcane plot points of one of this year’s most anticipated releases. So if you want to maintain your innocence and avoid disappointment, you know what to do, right? Right! Don’t enroll at Full Sail. I mean, uh, “read no further.” Does Christopher Nolan really run as tight a ship as he’s given credit for? In the last three weeks, major story details about his upcoming The Dark Knight Rises have been let slip by two of the actors involved -- one a novice who could be excused the gaffe, but the other an industry veteran who should seriously know better.

First, 12-year-old Joey King revealed that her role in the film is that of “young Talia Ghul.” She quickly clarified: “I can’t give too much away because I promised Mr. Nolan I couldn’t say anything. There are too many secrets about the character and the movie.” Why, yes there are, Blossom -- like the fact that Talia is in it in the first place. No one from Team Nolan had previously confirmed this, let alone that the character would be seen at different points in her life (which is obviously implied by King’s statement). Then, about two weeks later, no less than Liam Neeson did an apparently crummy job of deflecting a question about his own possible participation in the film (which, similarly, hadn’t even been made public up to that point): “I was on set for maybe an hour and a half and the director didn’t tell me anything of what it’s about.” So in that one sentence, he confirmed that: a) he’s in the picture; b) he’s playing Ra’s Al Ghul (an obvious inference, given that he assayed the same role in 2005’s Batman Begins); and c) the character won’t have much to do in the film, because how much can you really shoot in 90 minutes? All of which leads to a bigger question: Just what’s going on here? Since when does the cast of one of history’s most closely guarded screen stories start leaking like sieves with per diems -- and as a Bizarro-world way of saying “no comment”? Fanboy reaction to King’s revelation was predictably ageist, snarking that this was a tween’s idea of “saying nothing” and envisioning Nolan-commissioned hit squads descending on the little darling’s house. But Neeson is a seasoned pro who’s already worked with Nolan once; why would he suddenly let slip an important scoop like the extent of his involvement, when it would have been easy just to stay mum? Conspiracy-minded talkbackers are wondering if the whole thing hasn’t been some carefully orchestrated publicity stunt -- a way of keeping interest in the film running high among the faithful. I’m not sure why that would be necessary, or why planned leaks would have any more impact at this point than a garden-variety press release. And really, this isn’t the first time the members of Nolan’s crew have been on a different page as to what constitutes sharable intelligence. For a short while, nobody involved could seem to agree if it was OK to acknowledge that Anne Hathaway plays Catwoman in the movie, or if she should simply be referred to by her nom de Gotham, Selina Kyle. And in truth, one player in Nolan’s regular bat-ensemble has been known to run his mouth fairly consistently. But Michael Caine is just a lovable old drunk, so nobody pays any attention to what he says anyway. However, actors divulging major spoilers like the return of Ra’s or the appearance of Talia is something else altogether. And it raises the question of just how much zing the movie’s reveals are going to have in the first place. 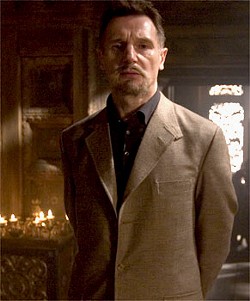 To understand why this is, a bit of background is necessary. In the comics, Talia is both the daughter of Batman’s sworn enemy and the mother of his child. (Yes, just as in real life, those two things tend to go hand in hand.) Talia’s dad, Ra’s al Ghul, is an international terrorist who has attained immortality via his ability to regenerate his body at regular intervals. (The character’s importance was elevated in Batman Begins -- making him a mentor to Bruce Wayne in the years before the latter started dressing like Stella Luna with issues -- although the more mystical aspects of his resilience were reduced to mere innuendo.) The inclusion of Ra’s in Dark Knight Rises would indeed bring the film series full circle, as Nolan has long said he wanted to do. And including Talia would open up a number of other, related story avenues. But that’s no reason to keep any of it hush-hush. When Marion Cotillard was announced as playing a Wayne Enterprises employee named “Miranda Tate,” a chorus of snickers went up from close observers. It had long been rumored that Talia would be in Rises, and Cotillard seemed to fill the bill visually.  And when the first photos from the movie’s outdoor shoots surfaced, there was Cotillard’s “Miranda” standing astride some bully boys and looking very Talia-esque in her society-girl-cum-Asian-fascist garb. Again, why would Nolan et al go to the trouble of hiding Talia’s inclusion in the script and then shoot one of her scenes in full public view? Is this picture’s entire covert-ops program being run by George Tenet? (“I’m tellin’’ ya, film the whole thing at rush hour on the floor of Grand Central! It’s a slam dunk!”) And on a larger scale, so what? If the movie’s big “shocker” is that Tate is Talia, it’s not going to surprise anyone who’s already heard of the character. That’s a respectably sized chunk of the movie’s core audience, and I don’t think Nolan wants to see his opening-weekend screenings met with a chorus of “Well, duh.” (And imagine Joe Public’s reaction: “Oooh, he had a daughter. That’s something I’ve never seen in a sequel before.”) The same holds true regarding the appearance of Ra’s: When word first leaked that Neeson had been on set, readers of the comics wondered if Nolan was going to break his “nothing supernatural ” rule and show the character coming back to life in the comics’ Lazarus Pit. But if Neeson was on set for only an hour and a half, it seems likely he’s appearing in no more than a simple flashback.

The only semi-logical explanation is that Nolan actually has something really wild in store, and that his actors and crew are helping him cloak it in a public-disinformation campaign that’s convoluted enough to be a plot line from one of his own movies. What that “something wild” could be, I honestly have no clue. When the “Miranda Tate”/”Selina Kyle” casting announcements were issued, I wondered if the big secret of Rises was actually going to be that Tate is Catwoman and Kyle is Talia. But then came the notorious photos of Hathaway looking like Julie Newmar’s niece ( the one who’s nothing special to look at, bless her heart, but she’s doing such good things in Junior Achievement), so shows what I know. Frankly, the whole thing just makes my head hurt. I need to step away from the computer and go unwind in front of something light and relatively unchallenging. Maybe I’ll throw in Inception again.