A little Spider-man with your coffee? 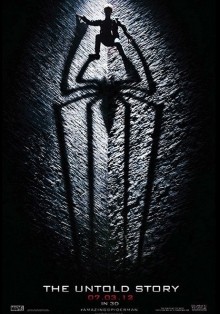 Inexplicably, Sony and Marvel decided to release the new trailer for their summer tentpole picture at 3am east coast time on Tuesday instead of, say, the Super Bowl, or, say, noon Tuesday.

Scroll down to view it, but I've gotta say that it was worth the wait -- at least for me, but I'm usually up at 3am anyway, so it was more just staring at Twitter and waiting. But in general it was worth the wait. There is a little bit of rehash from the teaser trailer posted earlier, but you'll always get that.

The most positive thing to take from this, I think, is that it actually feels like Spider-man this time. More importantly, it sounds like Spider-man. Quips. Snark. They're so important to the books, and Raimi basically ignored them. Though it's not quite in the Queens accent I've had in my head for the last 20 years, it's much better than the scratchy California accent in past Spider-man movies. Emma Stone would have been a better Spider-man than Tobey Maguire was (she's got the sass part down already).

More important still, the story is starting out right where it should, with Gwen Stacy. Yes, Peter had a few crushes before her, but she was the one. If you've never read it, Spider-man: Blue (by Jeph Loeb and Tim Sale) is a tremendous read about Peter and Gwen and Mary Jane. It's actually a better read than the original Stan Lee written issues.

I was originally iffy on this, because I didn't want to see something I loved so much turned into crap a second time around. The first set of movies, by Sam Raimi, came with too much Sam Raimi to them. As much as I've been assured that he is a good, even great, director, I've seen no evidence of it, least of all in the Spider-man movies. I'm iffy about Marc Webb, who came from music videos to direct (500) Days of Summer, but just from the glimpses of the trailer, he seems to get Peter a lot more as an emotional character than Raimi did.