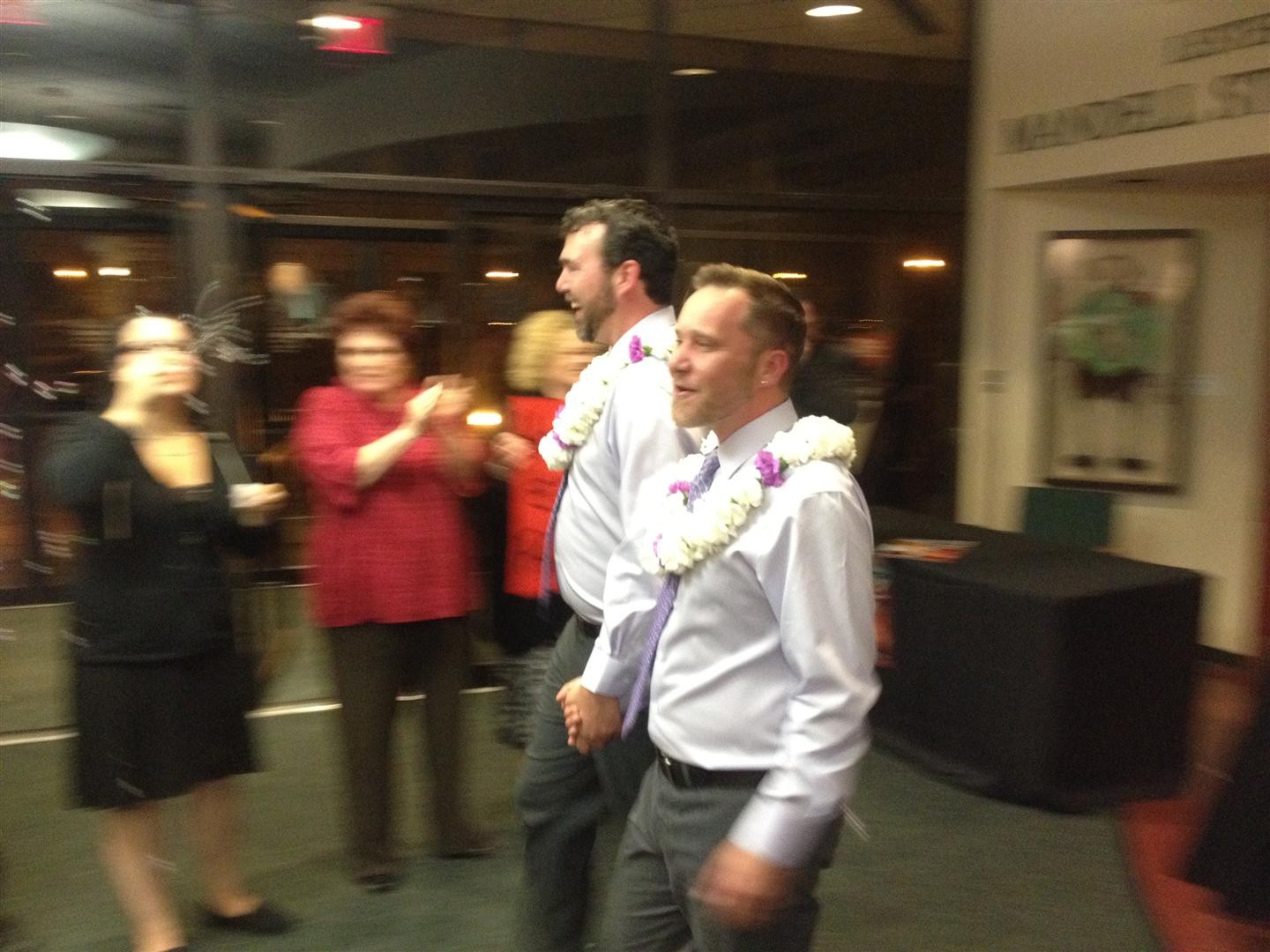 The show was particularly well-timed, coming just days after an appeals court declared Prop 8 unconstitutional. In the spirit of the show, following the Saturday 2/11/12 performance in the Orlando Shakes, a same-sex wedding was held. Chad Lewis and Jason Donnelly (former long-time members of the Orlando theater community, perhaps best know for their work on Fringe hits Varietease and Jaws the Musical) returned from their current home in California to tie the knot in a ceremony presided over by Beth Marshall and Michael Wanzie. State-sanctioned or not, it was a joyful and emotional celebration. See the accompanying video for excerpts of the ceremony, with the complete press release from the show & wedding following.

(Apologies for the abrupt editing in the video, but the storage space on my iPhone is no match for Beth's verbosity.)

Chad & Jason's wedding will immediately follow the final shows on Feb. 11th 2012 at 11pm in the Mandell Theatre with reception following in Patron's Room.

Playwright Lisa Cordes (Kansas City, Mo) re-interprets California’s Proposition 8 legal case about same-sex marriage by mixing blogs and trial transcripts with audio and visual elements. The U.S. Supreme Court banned video from court proceedings, but reporters and activists used social media to record the event. Cordes has taken all this information and concentrated it into 2.5 hours of shock, laughter and tears. Updates to the epilouge of the show have been made to give up to the minute news of the latest rulings.

A production team of 50 plus artists have banned together to donate their time/talents for this important reading of a trial that is paramount on our biggest civil rights issues at this moment. It is a community based event!

ADVANCE RESERVATIONS ARE STRONGLY SUGGESTED and can be made online at BethMarshallPresents.com.

Cash only on day of show at box office. Box Office opens one hour prior to curtain.

Full proceeds from this show will go to benefit the marriage of Chad Lewis & Jason Donnelly (former veteran Orlando artists now living in Ca.) Chad & Jason’s wedding will be officiated by Beth Marshall & Michael Wanzie following the final performance of PROP 8 ON TRIAL on Feb. 11th.

Chad and Jason Tie the Knot
Chad Lewis and Jason Donnelly proudly announce their plans to marry – whether it’s legal or not – in Orlando, Florida, onFebruary 11, 2012 at 11pm. The ceremony will take place immediately following the final performance of Beth Marshall Presents , Prop 8 on Trial, in the Mandell Theatre at Orlando Shakes. The couple will be married by best friends and long time collaborators, Beth Marshall & Michael Wanzie.. 2012 marks the 10th year of Chad and Jason’s relationship and they figure it is about time they turn their lease-on-love to marriage. Following their illegal nuptials, the pair plans to fly to whatever state it is legal and seal the deal. It is their hope that by February, California’s Prop 8 will finally be overturned and they can marry in their now home state; if not they will fly to New York, Hawaii or perhaps even Iowa.
Chad and Jason met in 2002, while Chad was the production manager for Fall River’s, Hedwig and the Angry Inch. While attending the performance, Jason observed Chad in his rocker roadie outfit as he navigated the Footlight Theatre at theParliament House, prior to the performance. By nights end, Jason had had so much liquid courage that he lost his courage to talk to this bleach blonde, ripped jean wearing rocker, so he decided he would return another night. This he did a few weeks later and once again lost the nerve to make contact. Following a third performance of Hedwig, the cast and crew visited Southern Nights (now Revolution Nightclub) for a bit of dancing and carousing. At almost closing time, Chad felt a tap on his shoulder. A tall, handsome lad introduced himself, “Hi, my name is Jason,” he blurted out, “I’ve seen you around. I like your style.” Caught off guard by this charming prince, Chad turned back to his conversation to quickly finish it and talk to this “Jason,” but like Cinderella, when Chad turned back around he was gone. At another “chance” meeting of the two following a performance of Hedwig, Jason gave Chad his phone number. At the time Chad was dating someone else and the phone call did not happen. The pair kept running into each other at the strangest of places, “Is it fate or is this guy stalking me?” thought Chad. To make a long story short (I know, too late), Chad ended the fling with his boy toy of the moment and decided to give this Jason guy a call. Chad had decided prior to the call that he did not want to meet at a bar or have drinking be any part of their first date. During the very brief phone call, and not knowing of Chad’s decision, Jason suggested they meet atGuinevere’s Coffee near Lake Eola. Perfect! Their first date was spent at the counter of the coffee shop during an open mic night that they paid little to no attention to. They walked around Lake Eola at least three times and while sitting at the water’s edge, gazing at the fountain, Jason asked Chad if he could kiss him. Chad said yes.
Now almost 10 years later, Chad and Jason, have been through a lot together: the rise and fall of several theatre companies, a national tour of Menopause the Musical, made A LOT of art together and a trip across America at the height of the recession. They have lived in 3 rented houses in Orlando, a tiny one bedroom apartment fondly referred to as “The Bears Upstairs” at the Pink Pineapple Palace, in an office of Chad’s sister’s house that was filled with women and LOTS of dogs while they searched for work in California, the basement of Chad’s mother’s house while they continued their search for employment and finally rented a beautiful 3 bedroom house in downtown Chico, California. They did finally find jobs and have worked for the past two years for Mains’l Services, Inc., a company that serves adults with developmental disabilities. They both currently work at 7th St. Centre for the Arts, a day center with an arts curriculum that is home to, Theatre in the Now: a fully integrated theatre troupe of abled and disabled actors. The troupe tours and performs at elementary schools each spring and develops original productions geared toward other adults with disabilities on such topics as Self Advocacy, Emergency Preparedness and their newest show on the Right to Vote. Chad is a coordinator at the centre, teaching The Artist’s Way, script analysis and Playmaking. Jason is launching a digital media component at 7th St. and has previously taught web safety, photo editing and technology, at another day center run by Mains’l. They currently reside in Chico with their longtime friend and roommate, Kirt Goodson and their two dogs, Sir Falcor Mahpit and Minnie Pancake.