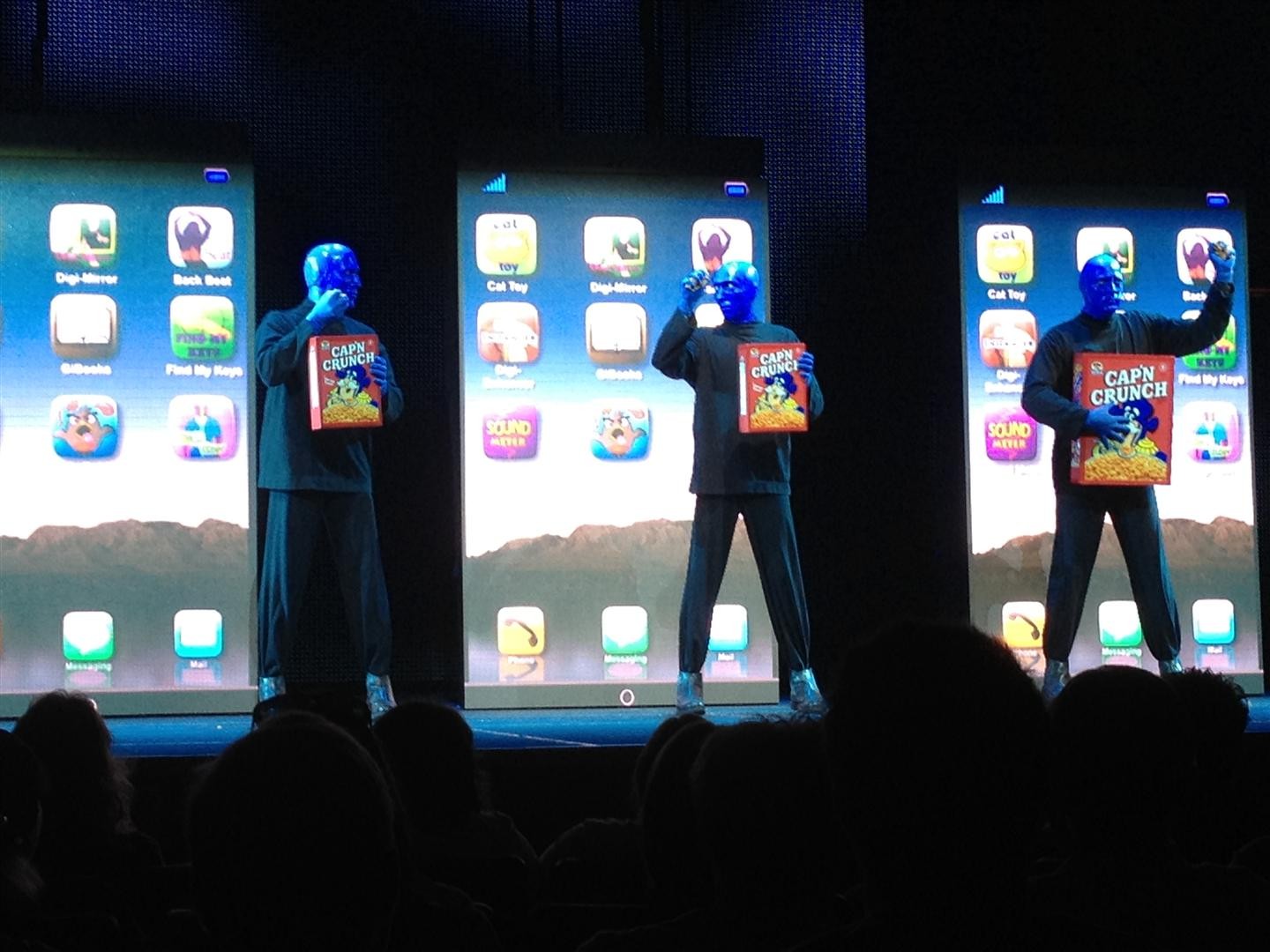 What  is bald, blue, and bizarre all over? Well, in Orlando right now (or at least until Tobias Funke and the Arrested Development crew return to Netflix) the answer is "the Blue Man Group."

The renowned group of performance art percussionists has been playing the Sharp Aquos Theater at Universal Orlando's Citywalk for over 4 years. Beginning next Friday (2/24/12) guests will get to experience a revised production, featuring about 45 minutes of updated and enhanced material, alongside 45 minutes of "classic" segments. Blue Man signatures like PVC pipe instruments and Captain Crunch still appear, alongside enormous "GiPad" tablets in skits that satirize modern social media culture.

Below you'll find two videos taken at the media preview held on Friday 2/16/12. The first depicts the show's new finale, which features giant color-changing inflated balls bouncing around the audience. The second is an excerpt from the post-performance Q&A with Phil Stanton, co-founder of the company. Complete press release details on the new show follow.

Opening to the public on Friday, February 24, the show will take guests on an incredible journey where they’ll join the Blue Men as they discover, engage and explore the world’s obsession with cutting-edge technology.  New sections include Blue Men interacting with “GiPads” (think Gigantic iPads), a funny and perceptive look at contemporary modes of communication; and a pulsating new finale featuring an original Blue Man Group music score that will have guests jumping to their feet.

“The heart of our show is, and always has been, the Blue Man, and his inquisitive, wide-eyed take on the world,” said Chris Wink, who co-founded Blue Man Group with Phil Stanton and Matt Goldman. “Our team of artists at Blue Man Productions has created fun, even astounding new visual aspects of the show, and our music team has given us a great new sound. We are really excited to incorporate these elements into the show at Universal Orlando Resort “

“This show will take one of Universal Orlando’s most popular experiences to a whole new level,” said Alice Norsworthy, Executive Vice President of Marketing and Sales for Universal Orlando Resort.  “It’s the perfect complement to the incredible entertainment we offer at our destination.”

Several of the signature moments that have made Blue Man Group one of today’s best-loved theatrical productions will remain in the show, although in most cases, they have also been updated.  And as always, the production will fuse innovative theatrical spectacle with improvisation and vaudeville-inspired comedy, art, science and irresistible music performed by the Blue Man Group live band.

“Many of our audience’s favorite pieces, including ‘Paint Drumming’ and ‘Gum Balls/Marshmallows’ will continue to be a part of the production – and yes, the first few rows will still need to wear ponchos,” added Phil Stanton, Blue Man Group co-founder. “But we have developed some brand new elements of the show that provide a larger-than-life, rousing, interactive experience that I hope will really speak to all cultures and give some of our most devoted fans a new reason to check us out again.”

Blue Man Group’s appeal is multi-generational, with several projects specifically designed for young people, including “Making Waves,” a popular touring exhibit for children, and the recently launched national “Invent an Instrument” competition. The company’s music, featuring custom made instruments and signature, percussive sound, can be heard on five albums, including the Grammy-nominated “Audio,” as well as various film and television projects. As the company grows, it remains true to its vision of providing exciting experiences in a variety of media, appealing to a broad range of age groups and cultural backgrounds. Learn more at www.blueman.com.