China: Come for the 3D, stay for the brutal repression

February 18, 2012 at 5:29 PM
comment
I hate to say this, because I really think the guy gets a bad rap -- but boy, did Joe Biden say something stupid yesterday.

According to Deadline, the Vice President had this to say regarding a new trade pact between China and the U.S. film industry: 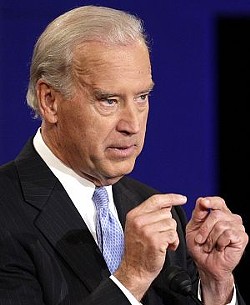 “This agreement with China will make it easier than ever before for U.S. studios and independent filmmakers to reach the fast-growing Chinese audience, supporting thousands of jobs in and around the film industry.”

Trouble is, I can’t tell where the independent spirit figures whatsoever into this supposed breakthrough in cultural exchange. Dig just a little bit deeper into the story as it’s presented on Deadline and elsewhere, and you’ll see that China has merely agreed to add 14 films to its existing quota of U.S.-made movies that get shown in their country. That quota currently stands at 20. (Which is why the MPAA, in a classic bit of Hollywood accounting, is hailing the new rules as allowing “50 percent” more of our films into China. Bless those little imps and their funny little math!)

The rub as I see it is that the 14 additional films we get to export will all be “premium-format” offerings -- meaning 3-D, IMAX or a similar big-ticket experience. Now you tell me what “independent filmmakers” stand to gain from an upswing in the international market penetration of RealD. Unless Nicole Holofcener announces that her next project will be Angsty Upper-Class Women: Comin’ at Ya!, I’m just not seeing it.

So as far as I can tell, “independent filmmakers” are simply going to have to fight against the big-studio product for the same 20 standard-format spots as before. I’m sure they’re well-equipped for that battle, given that an expertly international lobbying operation is now as indispensible to every indie auteur as FinalCut Pro. Oh, and don’t forget that China will now give 25 percent of the box-office receipts from U.S.-made films to the American studios who provide them, up from a measly 13 percent. On paper, that doesn’t seem to translate into any boon for the little guy, either -- that is, unless you believe that more money for Paramount and Warner Brothers is the rising tide that lifts all boats. Who would have thought Biden was such a big trickle-down guy? He used to seem so populist, what with the daily train ride and all.

This isn’t the first time a politico has pandered to the arty set while looking out for the interests of mainstream, big-bucks entertainment. A decade or so after the fact, I still remember Buddy Dyer singing the praises of the promised performing-arts center to an opening-night audience at the Orlando Fringe. Yes, the Fringe. I remember the chorus of crickets that acted as a polite substitute for “What do we care, fat boy? Like our crowd is ever going to see the inside of that place.”

Dyer was obviously ignorant of the situation, but I’m hoping Biden was just indulging in highbrow flummery he knew was bullshit; I’d really prefer to believe  that the Vice President of the United States knows more about the Chinese trade situation than, say, my Shih Tzu. (Though my dog does have the ethnic advantage.) Still, it’s the sort of press-conference scenario that makes you long for the feedback of Stuttering John, especially as Biden’s next comment was this:

“At the same time, Chinese audiences will have access to more of the finest films made anywhere in the world.”

(Voice from the peanut gallery: "Vice President Biden, does this mean we negotiated on behalf of the British?”)

Naturally, MPAA sleazemaster general Chris Dodd has joined the chorus of “interested parties” hailing this victory for multinational conglomerates as some sort of triumph of the American way. Meanwhile, Indiewire’s Jacob Combs points out that the Chinese government is still literally kicking the shit out of our Western actors, even when they’re taking their direction from filmmakers who happen to be Commie favorite sons.

Other recent developments in U.S.-Chinese moviemaking relations that Combs lists include the planned opening of a DreamWorks animation studio in Shanghai, as well as a new film venture on the part of the Chinese government that will have offices in Beijing and Hollywood. Now, I’m not one of those people who see China as the be-all-and-end-all threat to American economic health; just as with the Japanese in the early ’90s, that seems to be a racist smokescreen obscuring the even-more pernicious influence of whiter nations. But the fact remains that Japanese studio ownership has resulted in some curiously skewed artistic statements -- like the film version of Memoirs of a Geisha, which was a lovely tribute to all of the innocent kamikazes who suffered at the hands of the marauding Western imperialists in World War II.

Will we suddenly be seeing a distinct pro-Chinese bias in our motion pictures, now that said nation is suddenly no longer the haven for slave-trading Blu-ray pirates we were supposed to be petrified of three weeks ago, and instead our pals in good, old-fashioned crony capitalism? Maybe our kids will be lining up some coming summer to see Pixar’s Tanks, a sweet animated paean to the valiant soldiers who bravely faced down the vast hordes of student anarchists in Tianamen Square. It should all make for a heckuva experiment in globalization -- until Foster Friess brings down the whole house of cards by wondering who this “Nan King” is, and if she wasn’t just asking to be raped anyway.