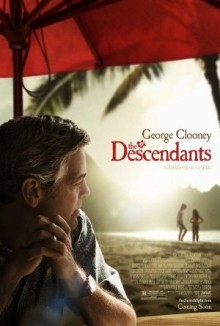 Over the last couple of years, kind of going back to the beginning of the early aughts, one or sometimes both of the two the screenplay categories has become almost the defacto "Best Arthouse Movie" award.

When you look back to 2000, you'll see the two big "indie" films of the year won, Traffic and Almost Famous. Then The Pianist, and Lost in Translation, and Sideways, and Eternal Sunshine, and Juno, etc, etc.

I'm not entirely comfortable with the bastardization of the category, but it seems destined to go that way again this year, just looking at the nominations.

After it's win for Best Adapted Screenplay at the WGA awards last weekend, you'd have to call The Descendents the frontrunner for the award. Alexander Payne has a previous Oscar for Sideways, but it's been so long now that it shouldn't hinder anyone from voting for him. I was not as taken by the story -- or its actresses -- as others were, but it's what I picked in my Oscar ballot to win.

Hugo is the only script in the category that I've read the entirety of the original material for, and Logan didn't change all that much. Most of his work was done on side characters, like the Station Inspector, and melding a few characters into the film professor, Tabard. Still, I'd call it the darkhorse to win on Sunday.

Paramount sucks and requires a Guild ID to download anything from their awards site.

There is a lot of "If only..." with this high tension political thriller, but the only one I need to talk about is the key one: if only they'd picked a different scandal to trap up Clooney's politician with. I mean, really, guys. That was the best you could do? The inherent commonality and lame execution killed the entire film for me.

I don't think it has a shot in hell, but I loved every second of Moneyball. It wasn't strictly magic how they turned the book Moneyball (which I never managed to finish) into a film. They just went to the source material and took out as much of the numbers game as possible, but it was magic how they made it interesting. However, most of the positive vibes the film will receive will be because of Brad Pitt and Jonah Hill, who are both also nominated -- and more on Pitt tomorrow -- and they won't give Sorkin's (justified) Ego two awards in a row.

I found the script and the story to be so much better than the execution of the film. The flaw was in the casting. Not because they cast bad actors (all of the actors are honestly great), but one particular actor in a particular role made the ending quite obvious. As a rule I don't try and figure out the endings of mystery films. I don't find it an interesting sport to see if I'm smarter than the writer. I paid my money and want to take the trip the writer has labored to bring me on. But one small thing went wrong.

The Descision: Tinker Tailor Soldier Spy. You thought I was going to say Hugo, didn't you? Nah. Hugo was all about spirit, feeling, sense and memory -- not plot. No, TTSP won't win, but God dammit it should.