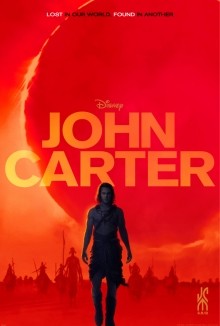 So, it's Friday afternoon and Disney's spring tenpole picture, the Andrew Stanton (Finding Nemo, Wall-E) directed John CarterI, has been open for a few hours now.

Going strictly by my Twitter feed (which is very film news and film nerd heavy), no one is talking about it. No one.

In the last few days even, the only talk I've seen about it has been retweets of kind words from Andrew Stanton's twitter feed.

I haven't seen it yet, but by all accounts (including our own 3-star review by Will Goss) it's an all right movie. I'm debating between an afternoon screening today, or just waiting until Monday, but it's not the story that makes me want to see it, it's the fact that I want to support Andrew Stanton, whose work I enjoy. (Also, for what it's worth, when big pictures like this fail, even if you're not a fan of them, they really hurt mid-level pictures. The dirty secret of Oscar time is really the fact that tentpole pictures used to pay for "cerebral" movies that didn't make their box office back, but now they barely make any money on their own.)

The big problem with John Carter is that I have no idea what it's about.

Dude goes to Mars and there is a war of some sort and Earth is, of course, next.

Yes, that's standard. But what the hell is it about, really?

Who is attacking Mars? Why? Why is John Carter on Mars? What or whom is he fighting for to go back? Does he even want to go back? What's the princess's deal? Why can John Carter jump like 200 feet in the air? Mars gravity is low, but it isn't that low.

I've seen all of the trailers, and read much of the endless Q&A tweeting that Stanton does when he's killing time between flights for press junkets, but in all of that time, I've never really been given an in into the film. I've been shown lovely but not that impressive CGI (sorry, I'm still more impressed by practical effects) and Taylor Kitsch's bare chest, but that's really all I've been shown.

That's not enough. Trailers are supposed to build a story underneath the bits of showing off their effects. The Hunger Games trailer, for instance. Here, watch it:

That's a hell of a successful trailer.

This is a major droppage of the ball Disney has presided over while The Hunger Games gang has an tons of info on why I should care about Katniss Everdeen. The Hunger Games gang are going around to malls around the country to drum up interest and by all accounts it seems to be working like mad. I even broke down and bought the first book (impulse supermarket buy, I admit it). It's complete shit, but I can see the appeal it has for teenagers and those who still wish they were teenagers.

You know what book wasn't on the supermarket shelf next to all three of the The Hunger Games books and all of theTwilight books and The Help, etc, etc?

Why is Disney so inept at this? They've been a marketing force for almost a century now.

I didn't grow up on John Carter books, so if Disney's game plan was to appeal to the imagination of John Carter fans, it's a failure for many people (and really, John Carter fans would have gone regardless). I grew up on stuff like Rendezvous with Rama, and Philip K. Dick and Ray Bradbury short stories, and I didn't know anyone who was a big John Carter fan, like I knew kids who were huge Lord of the Rings nerds. John Carter of Mars always seemed so stiff and unexciting, like something our grandfathers might have read if they were dorks.

Whether is was corporate politics, internal failures, not knowing how to say no to a Pixar legend or whatever else might have been an issue, when Disney looks back at all of the red ink this could potentially cause them, they really have no one to blame but themselves, because the fans are always willing, but the CGI is weak.