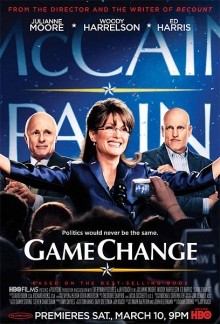 So three new movies opened this week: the $250m CGI epic, a hi-concept Eddie Murphy vehicle, and a Sundance darling horror flick starring current It Girl, Elizabeth Olsen. Yet the biggest splash was a cable movie that told a story we pretty much new already.

HBO aired their Sarah Palin biopic last night, and, well, it was scary. Good, but scary. Julianne Moore tap danced a little on the line between being in character and being in caricature, but it was generally a good performance -- though as a hockey fan and a Rangers fan I feel aggrieved to see her wearing a Rangers jersey when she was booed mercilessly at a Rangers-Flyers game, which is probably the only time Rangers and Flyer fans have ever been in one voice about anything.

But Game Change was the wrong title. They should have called it The Bullet Dodged. Or, simply, Whew.

The other big story of the week is that it's SXSW time in Austin, TX, where the thunderstorm apocalypse is apparently taking place. It's just started though, and no films have really separated themselves from the pack. Maybe by next Sunday.

Well, really the other big story of the week was the Kony story, but Erin Sullivan has that shit handled already in her piece, Kony Island.

-A very long, in depth look at the life of Claude Lanzmann, who directed Shoah, the definitive 9 1/2 hour documentary on the Holocaust. (The Observer)

-12 magazine articles that were turned into feature films. I can vouch that The Man Who Knew Too Much (which became Michael Mann's slightly biased but still brilliant The Insider) and Racer X (imagine The Fast and the Furious taking place in Manhattan? That's where the article takes place) are both good reads, but you're on your own for the rest. (The Electric Typewriter)

-Pixar animator Catherine Hicks says to avoid Brave trailers going forward because they're very spoiler-y. I'd listen to her. (@cathicks)

-This is a text book case of how to deal with a nudie picture leak and come out ahead of the game. (@OliviaMunn)

-Simple Minds kind of regrets the whole "(Don't You) Forget About Me" thing. Forget them. (Guardian)

-I've been (justifiably) merciless on Kevin Smith's Cop Out in the past. But perhaps it was more Bruce Willis' fault? (NY Post)

-I don't know if its more ridiculous that they're making Ouija: The Movie, or that it's going to be a found footage film. (Deadline)

-I hope Bill & Ted 3 is a spoof of Antonioni. Bill can get La Notte and Ted can get L'eclisse. (Den of Geek)

-I somehow missed the fact that they cast a kid named Aramis Knight to play Bean in the Ender's Game movie over two months ago. Whoops. (EnderWiggin.net)

-Remember when Superbad came out like five years ago? Now a video of the table read for one of the sex scenes leaked on line. It's not nearly as cool as the Karate Kid videos though. (IFC)

-The first trailer for Now is Good, the adaptation of the book Before I Die, with Dakota Fanning sporting a weird British accent. We previewed this in the paper a few weeks ago. (Yahoo)

-There is finally a poster for Wes Anderson's Moonrise Kingdom. It's also the opening night film at Cannes this year. (Coming Soon)

Finally, he plays a mean pastrami...