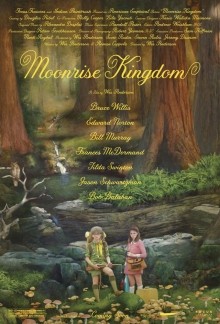 Yesterday, the joke of the day on Twitter (by comedian Rob Delaney as far as I can tell) was that The Social Network 2 would be about Facebook buying Instagram -- the fake vintage photo app -- and  Wes Anderson would direct it.

It was a good a joke, of course, even if it's just a continuation of every other Wes Anderson joke.

At least everyone presupposes it was a joke.

But maybe it wasn't?

This email was in my inbox when I woke up this morning: Focus Features' MOONRISE KINGDOM | NEW Vintage Team Photo!

It's just a matter of odd timing. Maybe Focus saw the Tweet and released it today on purpose, but the picture had to be taken months ago, when they shot the film last summer. Probably in pre-production, even. But it's fun nonetheless.

Moonrise Kingdom opens May 25th, but based on track records it'll probably mid-April in Orlando.