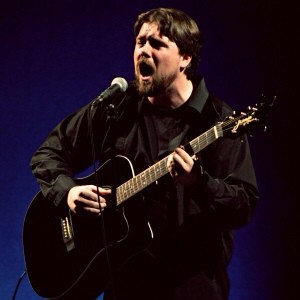 "Comedy is a subjective sport, and should be judged on difficulty like gymnastics," proclaims comic/musician Paul Strickland at the start of Jokes, Songs, a Hat, Etc! "If you don't laugh at some of the jokes, it isn't because they aren't funny, but because they are hard." He doesn't have to worry, since that disclaimer is the departure point for a delightfully funny but deceptively delicate balance of stand-up, songs, and soul-searching.

With his titular grey fedora, baggy jeans, and askew necktie, Strickland has a classic comic's hangdog countenance, and the subjects of his jokes tread well-worn topics: allergies, relationships, aging, children. Luckily, Strickland has superb timing, so even the most awkward punchline lands solidly, and even when he delves into the scatological, his delivery is so innocent that any outrage is diffused. ("I know that joke borders on the misogynistic," he quips after one randy rant, "but I also knew you'd laugh.")

Then suddenly, Strickland switches gears into a sweetly sentimental singer song-writer. His dexterous finger-picking evokes a classical guitar style, and his voice is warm and unpretentious, while his lyrics reflect a wistful worldview that feels older than his 32 years. The music makes a welcome counterbalance to the rapid-fire humor, though he still occasionally interrupts his songs with surreal asides.

Strickland has a wacky way with words, calling an elderly lady an "adorable zombie," or claiming pollen is "flowers having nonconsensual sex," and his mellow music makes me smile. But what elevates his show is the "Etc" of the title: apparently honest interludes where he steps from the mic to remark on his endearing insecurities. In his self-admitted quest to be liked, he shoehorns facetious audience dedications and anemic audience participation into the show, but it is Strickland's unguarded openness that really connects with the crowd.

At one point, Strickland reminisces about standing on a stray streak of sunlight across his hotel carpet, "walking a tightrope of sunshine for an audience of no one." Paul agonizes empathetically about navigating the line between being the person you like, and being the person you notice others like; between selling something you are proud of, and making something to sell; between being honest and putting on a show. From where I'm sitting, he's walking that tightrope just fine.

(Note: The author and a number of other critics were invited by the show's producer to attend and review a pre-festival preview dress rehearsal. This article is based on that performance, which should be essentially identical to the presentation premiering Friday at Fringe.)