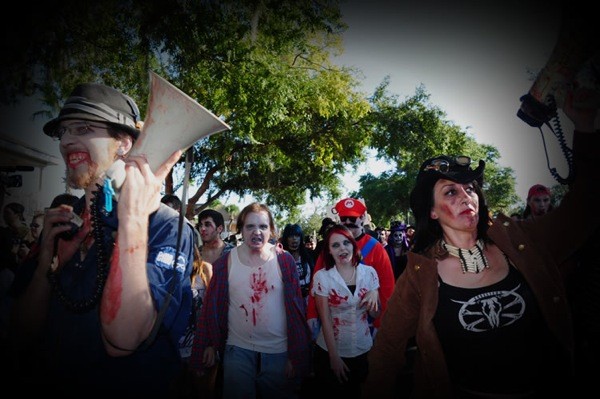 Friday, May 25 – Spooky Empire's May-Hem with Linda Hamilton, John Astin, Ace Frehley, Joey Lauren Adams, Vivica A. Fox, Monica Keena and more through May 27 Wyndham Orlando Resort 8001 International Drive 888-690-4695 spookyempire.com $30-$35 (day pass); $50 (weekend pass); $199 (VIP) Is it even possible to label a horror gathering a “breath of fresh air?” If so, Florida event promoters Spooky Empire have earned it after spending the last several years growing their brand the right way – by giving the fans what they want, nay, need: a sense of spectacle. For decades, Orlando’s geeks had to either gun it to Georgia’s DragonCon for a dose of convention excitement, or try to get revved up for another MegaCon. No disrespect to those other cons, but the ol’ Joss-verse panels and Jim Lee/George Pérez signings just aren’t cutting it anymore. So here comes May-Hem, a three-day resort party so buzz-heavy that even some of the ladies around the OW office were checking their calendars for this one. Friday brings a boozy, bloody pool party with the Bloody Jug Band and a one-man show by “Rowdy” Roddy Piper, while Saturday boasts original The Addams Family cast members, some Buffy and View Askewniverse stars and (OMG!) a shadow cast performance of Dr. Horrible’s Sing-A-Long Blog. How about KISS original shredder Ace Frehley and the Terminator franchise’s Linda Hamilton on Sunday? Yeah, we thought so. – Justin Strout