Scott Randolph to step aside; Linda Stewart to make a lot of noise! 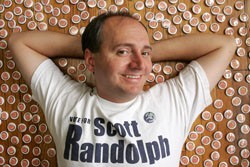 We have a lot to say about this, but our computer keeps eating our words, so we'll let this press release cover the tears (and our anger at our computer). Suffice to say – and as expected – State Rep. Scott Randolph, D-Orlando, will not be seeking reelection this year. What that means for Democrats is that there will be one less solid progressive who knows what he's doing in Tallahassee, though we expect former Orange County Commissioner Linda Stewart will carry some of that water. Who knows? Read the presser below.

HE WILL NOT SEEK RE-ELECTION, ENDORSES LINDA STEWART

Orlando, FL — State Representative Scott Randolph (D-Orlando) issued the following statement today: “For six years, the residents of Florida House District 36 in Central Florida have honored me with their trust and support. I have been truly privileged to fight for the beliefs of my neighbors in Orlando and to stand against the radical agenda of the current legislative leadership in Tallahassee.?  ?“Today, I announce that I will not seek reelection in November. I will instead focus my efforts on ensuring that the Orange County Democratic Party plays a vital role in the many races in Central Florida--as well as ensuring victory for President Obama and Senator Nelson--and preparing to run for the statewide office of Chair of the Florida Democratic Party in January 2013.  ?“My decision has not been made lightly and comes after close consideration of new legislative district boundaries. Due to redistricting, three-fourths of the residents in the new state House district in which I reside are individuals I have not previously represented. I believe it would be unfair to those constituents for me to focus heavily on non-legislative matters, as well as unfair to the Florida Democratic Party--should I be elected Chair--not to be exclusively focused on strengthening the Party to defeat Rick Scott in 2014.?  ?“I am proud of my legislative service. For six years, I fought back against a radical agenda that continues to shift the tax burden to the middle class, that has shrunk Florida’s commitment to spending on Florida’s students in public schools, and which has led an unrelenting attack on women and all of Florida’s families.?  ?“Before Rick Scott was elected governor, I had helped defeat several voter suppression bills, stopped attacks on women's healthcare and practically halted attempts to undermine protections for Florida's water and beaches. “I do not leave the Legislature without a superb candidate waiting to take on these battles. For this competitive seat, an excellent candidate has been recruited that I know will continue to fight back against Rick Scott’s agenda. I am confident that she will stand against Rick Scott’s penchant for gutting public education and the rewarding of cronies with special-interest tax breaks and government contracts.? ? “This candidate will continue our fight to protect women’s rights and to bring equality to everyone in Florida. She shares my history of commitment to Florida’s environment, which comforts me – and should assure you – that we will have a voice in Tallahassee that recognizes the economic engine that is our natural resources.? ? “For these reasons, I proudly endorse Linda Stewart as the Democratic candidate in Florida House District 47.?  ?“Both Susannah and I will work as hard to put Linda Stewart in the Florida Legislature just as we have done for the last six years with many candidates throughout Central Florida. I look forward to helping her campaign to victory in November, and I look forward to my own continued public service for our state.? ###