Making covers for Orlando Weekly is easy when you have a talented photographer taking shots of an ice cream party of one. Marla Hernandez was behind the camera.

Lily Minks, thanks for agreeing to appear on our summer guide cover. We're looking for deep sadness over your ice cream cone melting.

Okay. I admit, it could use more time under the hair dryer. But forget about that. Let's do much sadder.

Okay. What if you were really sad?

Yes! ... But somehow not right for the cover. I'm out of ideas. Why don't you just make whatever face you want?

Of course, that's not really how it happened, except for the giant, horrifying sun showing up. Boys were banished from the set, per Lily's request, so I couldn't coach on this one.

In reality, Lily was trying out different faces with photographer Marla Hernandez and her mom, Michelle Minks. They made an ice cream mess at Stardust Coffee. Lily and Marla really nailed it. 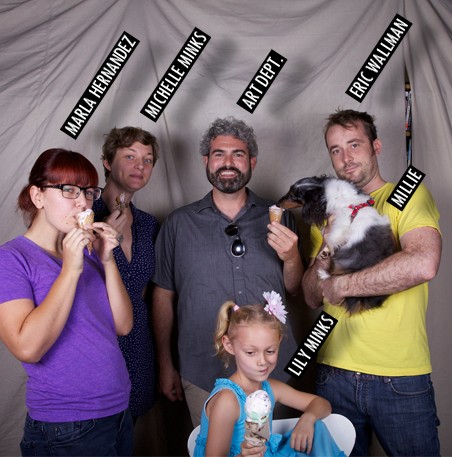 Thank you to Eric Wallman, who brought his dog, Millie, to the shoot. Millie is a special breed that can be trained to detect and eat ice cream.

Thank you to Lily Minks and her parents for their support and help. Thank you to Stardust for being Stardust. Thank you to Marla Hernandez for being an awesome photographer. Marla's bio is below. Friend her, follow her, hire her! She made making this cover easy.

MARLA HERNANDEZ Marla Hernandez grew up in the suburbs of Ft. Lauderdale and spent much of her young life in the Atlantic ocean. She began her education with an interest in marine biology but could not deny her creative roots and interest in photography. She found herself a resident of Orlando in late summer of 2008 to continue her BFA Art degree. Since graduating from UCF a year ago, Marla has focused on gaining experience in the fields of commercial and fine art photography. She plans to relocate to New York City and establish a career in the arts.