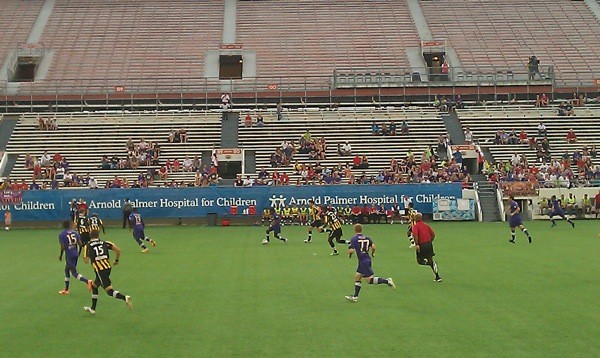 Last weekend’s wet weather wasn’t a deterrent for Orlando City Soccer Club fans. In fact, a crowd of more than 5,600 (including the ever-boisterous Orlando City ultras) weathered stormy conditions to watch the Lions shore up the number one ranking in the United Soccer League with a 2-1 victory over Charleston Battery on Saturday, June 9 at the Florida Citrus Bowl. (More photos from the game included below.)

And as if the female fans of Orlando City Soccer Club couldn’t get enough of the players smooth moves on the field, our hometown soccer boys will host a Soccer and the City: Lessons From the Lions event at Blue Martini on June 19 at 6 p.m.

Orlando City soccer players will be on hand that night to teach “the basics of the beautiful game,” and your admission ticket ($25 in advance, $30 at the door) scores you one free cocktail, appetizers, an Orlando City tank top and goodie bag. (Guests must be 21 years and older.) 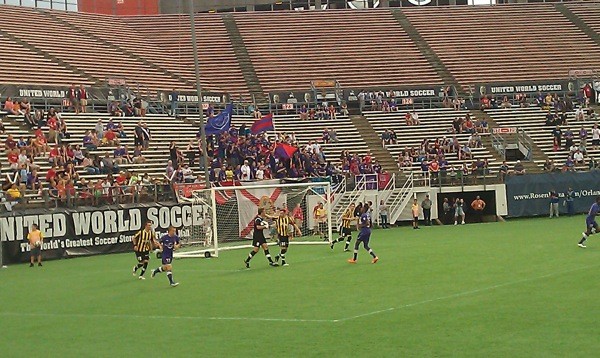 So whether it’s Matt Luzunaris’ speed or Jamie Watson’s boyish charm that gets you going, this is your chance, cleat-chasers, to get up-close and personal with your favorite Orlando City player. For tickets and more details, visit Orlando City’s website.

The Lions next home game will be a Father’s Day match against Antigua Barracuda FC (6 p.m., June 17 at Florida Citrus Bowl). Tickets start at $15 and can be purchased through the team’s website.