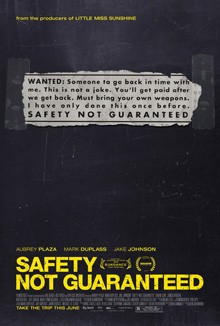 Yes, nothing like getting word on Monday that a film is opening in Orlando on Friday, and then not screening it for local critics.

Usually it's the mark of a terrible film that the company is hoping to squeeze a few dimes out of before anyone realizes how awful it, but, damn, Safety Not Guaranteed looks damn good. Your Faithful Orlando Weekly Critics were all looking forward to it, but it's not meant to be.

Ah well. Personal/professional annoyance won't keep us from telling you that the film opens on Friday, June 29th, at the AmStar Stadium 12 in Lake Mary (MAP -- the map pinpoints the wrong spot, but the theater is just across the way in the giant oval building with wings).

When an unusual classified ad inspires three cynical Seattle magazine employees (Aubrey Plaza, Jake Johnson) to look for the story behind it, they discover a mysterious eccentric named Kenneth (Mark Duplass), a likable but paranoid supermarket clerk, who believes he¹s solved the riddle of time travel and intends to depart again soon. Together, they embark on a hilarious, smart, and unexpectedly heartfelt journey that reveals how far believing can take you.

View the trailer at Apple.