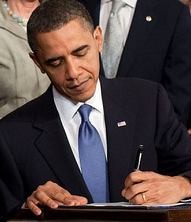 Despite what you may have read a few minutes ago on CNN.com, which posted a story indicating that the Supreme Court struck down the individual mandate portion of President Barack Obama's healthcare plan, the Affordable Care Act has been upheld.

“The Supreme Court carefully considered the constitutionality and appropriate legal arguments associated with this overreaching piece of legislation. Ultimately, the rejection of the individual mandate is more than a legal determination; it is an upholding of the American way of governing and the ideals of individual freedom and liberty—the fundamental principles that shaped our nation and will continue to guide us into the future.

“The magnitude of such government intrusion would have been a significant departure from the limited government envisioned in our founding documents.  Government interference in the marketplace would have had a devastating impact on free market competitive forces, consumer choice, and individual investment—undermining the American economy and further increasing dependence on entitlements.

“I am proud of the role Florida has played in defending our Constitution, protecting the individual freedoms of the American people and affirming the limited role of government our founders designed.”

At 10:14 a.m., his office sent out an email to its media list saying, "Please disregard previous healthcare statement."

Itchy trigger finger. It'll get ya every time.