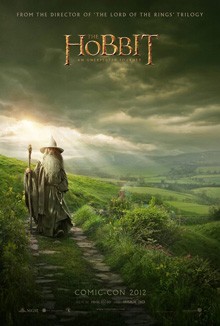 What an incredibly, monumentally, stunningly boring week this was as far as film news goes. Between the blackouts in the Mid-Atlantic that knocked a bunch of web services offline and the 4th of July getting in the middle of everyone's shit and Comic Con next weekend (and Scott Howson refusing to trade Rich Nash... STILL, 6 months later!), it just seemed like a good break week for everyone.

1) The Hobbit finished principal photography. Of course, there will probably be a lot of reshoots and a lot of FX shoots and it's really only a milestone for the filmmakers and cast, not the fans, though perhaps a little more footage than was originally intended will show up at Comic Con next weekend.

2) The Dark Knight Rises began screening for VIP critics (ie, not us).

Onward and upward then.

-"Is Ted really America's favorite family film?" It's a good question. When I went to see it the theater was about 80% kids under 17. There was an unruly pack of ten giggling 13 year old girls sitting behind me, a kid who wheezed and lost his shit and repeated every joke for the whole movie sitting with to his mom to my left, and a family of mom, dad and two kids (girl maybe 12, boy maybe 10) to my right. Not that I object to kids seeing the movie or anything, I just object to them all up in my shit while I'm trying to laugh at shit and weed jokes. (LA Times)

-EW talks to some of Hollywood's biggest stunt coordinators. (EW)

-This Wednesday's NY Times crossword puzzle had a Pixar-y theme to it. (NY Times)

-Creating the world of Beasts of the Southern Wild (which opens the Enzian on July 27th). (i09)

-So, Jurassic Park's T-Rex was probably wrong. (The Guardian)

-The mid-budget character film, now on the small screen. (IndieWire)

-4D is back, apparently. Thanks, South Korea. (LA Times)

-One of the inspirations for 21 Years, Alexander Gellner's crazy good One Minute Puberty. (NWS) (Cartoon Brew)

-Denise, with Alison Pill and Chris Messina and written by Neil LaBute. (WIGS)

-The Gloaming, an animated short about a teenager playing God on another world. (i09)

-Why Stop Now, which bowed at Sundance earlier this year, starring Jesse Eisenberg. Shoulder be out on VOD now. (Yahoo)

-Jerry Seinfeld's new webseires, Comedians in Cars Getting Coffee, which I can't wait for. (THR)

-This clip from Julie Delpy's 2 Days in New York is hysterical. It's out on VOD now. (Vulture)