A few weeks ago in Live Active Cultures, I commented on the rapid and unexpected demolition of Universal Studios Florida's long-dormant Soundstage 44 (once home to Murder, She Wrote and Hercules & Xena special effects demonstrations), and quipped that I'd lay coin on a year-round haunted house being constructed on the spot.

Luckily, I don't have much cash to wager with, because the smart money is increasingly calling Transformers the odds-on favorite. I'm not shocked Universal Orlando's management would want an East Coast clone of this killer 3-D dark ride, having happily ridden the Hollywood version 6 times in a row during my recent trip. But I'm still a little confused, from a long-term strategy perspective.

Industry observers originally anticipated that Transformers would eventually replace the Spider-Man ride at Islands of Adventure (whenever Disney inevitably signs a ginormous check to regain Marvel Comics' Orlando attraction rights from Universal) because the simulator systems they are built on are so similar. Though the attractions have different tracks (the Transformers building has an upper floor and giant elevators) they share identical 3-D projectors, and their ride vehicles are the same save slight cosmetic variations. If nothing else, I'd expect Universal to want to recycle Spidey's priciest parts into its robotic cousin, if and when the time came for the web-slinger to swing away.

More importantly, both the Spider-Man and Transformers rides' storytelling beats are remarkably similar: something jumps on your vehicle's hood at the start; you spin through tunnels avoiding a succession of bad guys; you're sprayed with water, then warmed by flames; you become mixed up in an aerial battle among skyscrapers; you fall off a building and get caught at the last second; you get thanked for helping saving the world, even though you just sat there and screamed.

So while I'm sure Transformers would be wildly popular here, I wonder if visitors to both Universal Orlando parks might find the experiences redundant. Universal Studios Florida's product mix might better benefit by using that space a more family-friendly experience (like a slow-moving indoor boat ride), especially since the under-construction Harry Potter expansion is expected to include another wild roller-coaster dark ride.

Anyway, my well-reasoned rationale appear to be rendered irrelevant, since whatever Universal is building on the ashes of Soundstage 44 -- and they still refuse to officially say what it is -- definitely looks much more elaborate than a simple walk-through haunted. As you can see in the accompanying photos, the construction cranes currently in use overwhelm everything else in the area, and appear to be suitable for erecting a substantial mid-rise structure.

Here are some other recent hints on the future of Universal's mystery project, both supporting and discounting the Transformers rumors:

So, for now the tea leaves are trending towards Transformers. But I'm keeping my ear to the ground, and will bring you any new information as it's revealed. 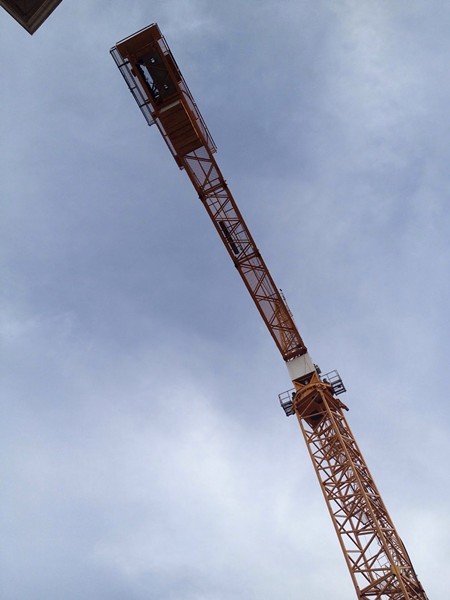 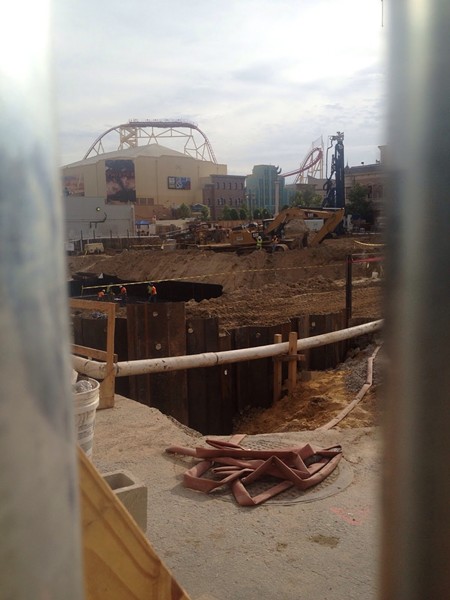 P.S. Just for fun, here is a look at the almost equally enormous equipment working on Harry Potter Phase 2 over on the opposite end of the park.