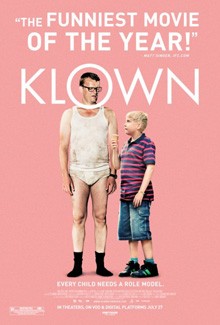 Disgusting. Wretched. Loathsome. Scandalous. Depraved. Nearly criminal. Yes, this film, based on a Danish sit-com of the same name, is most certainly all of those things.

But it's also one other thing: hilarious.

The film concerns the emotional growth of misfit manchild Frank (Frank Hvam) during the most important week of his life.

On the eve of an epic canoeing trip with his friend Casper (Casper Christensen) -- who has covertly dubbed it the Tour de P (I'll let you guess what the nefarious "P" stands for) -- Frank is confronted with two harsh realities: his longtime girlfriend, Mia (Mia Lyhne), is pregnant for one, and this is the week they are supposed to watch her nephew Bo (Marcuz Jess Petersen), while her sister is on her honeymoon.

Mia is unconvinced that Frank will be a responsible father, especially when their house is robbed and Frank leaves Bo behind while he escapes danger, so Frank does what any normal, healthy adult male does in these situations: he kidnaps Bo, taking him on the canoeing trip in an effort to show him a great time and prove that he is father material.

Have you figured out what the "P" stands for yet?

If there is a wrong move to make in this film, Frank and Casper end up finding it. The results are zany and disturbing, but in the way that an American film maker probably couldn't get away with: much of the film centers around teasing Bo about his small willie, Casper's sexual preoccupation with high schoolers on a field trip, and Frank's half-hearted attempts at -- well, why spoil the comedy? That's the film's draw.

After that, the film is hardly innovative. It could be handily described as "Two and a Half Men with a set of balls and a sense of humor" (zing). But it doesn't need to be either. Somewhat oddly, the film has a lot of heart to it. Frank is well meaning, after all, even during the most awful and misguided things he does. His quest is to be a good dad, even if Casper's quest is to get laid in as many hedonistic ways possible. Contrasted to Casper, Frank is awkward and tentative, and extremely odd. He's a failure through and through, but in Frank Hvam he becomes a lovable loser, perhaps precisely because everything backfires so badly on him. He is almost the Danish Charlie Brown, if Linus had a messy sex addiction and Rerun was dragged along for the ride.

It's not going to be everyone's kind of film though, which is possibly the most important thing to know about it (which is why I'm burying it here at the bottom where no one will read it). It's crassness is supreme, and often uncomfortable for the squeamish (or the self-righteous, who will say, "you can't show that on screen!"). If society has indeed gone to hell in a handcart, this is the handcart, and it's paddling straight down the river Acheron, laugh after devious laugh.

Klown is available as a digital rental (HD) from Drafthouse Films.