In Why Stop Now, Phil Dorling and Ron Nyswaner’s new stoner comedy, Jesse Eisenberg plays Eli, a put upon young pianist who is about to experience the worst day of his life. For years, Eli has been the one taking care of his younger half sister, Nicole (Emma Rayne Lyle), while his wild drug addict mom, Penny (Melissa Leo), went out on benders, barely able to hold down a job as a waitress.

As he is about to graduate and go off, he hopes, to a music conservatory, he's finally convinced his mother to get clean and go to rehab before his audition. Problem? Yes, of course. As Penny tries to enter rehab, she is turned away. Why? Because she’s already clean. Solution? Yes, of course. Go cop a hit.

It sounds like a set up for the greatest drug romp since Drugstore Cowboy, but sometimes things don’t work out as planned. 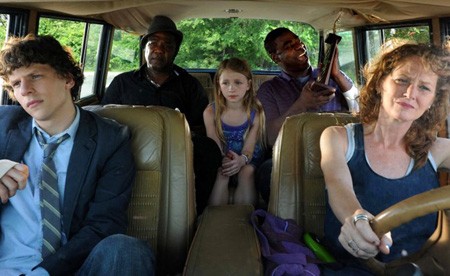 If there is a bright spot in the film, it comes in the shape of a gimpy Tracy Morgan, who plays Sprinkles, the cuddly drug dealer who has run out of drugs. The problem is compounded as neither Sprinkles, nor his sidekick, Black (Isiah Whitlock Jr.), can speak Spanish, and Eli has to step in to order the drugs, causing an unfortunate chain reaction wherein his arm is broken by the drug kingpin, who then falls in love with Penny. Isn’t it always like that?

Really though, the film’s main problem is that it is entirely too frivolous an affair from start to finish. Nothing is at ever stake, not really. There is never any follow through on the film’s problems or threats or accidental drug ingestions, and what does follow through to the next step is always played for stock comedy. Every set up and pay off comes along at a natural progression, everything is expected. What could have been a riotous display deeply messed up hurdles and roadblocks to the characters’ wants end up being little more than a circuitous route to getting everything they desire. The films is a born indie drama concept rendered out into a dramatically lazy write off, one that unfortunately never comes close to being funny enough to make up the gap.