Eastwood the racist: The ugly, the ugly and the ugly 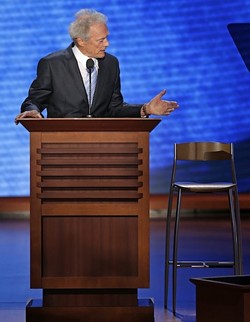 When Clint Eastwood pulled out his now-notorious empty chair at the RNC, I was lounging in front of the TV with my glasses off, resting my eyes after a long day of working on the computer. In my myopic stupor, I couldn’t tell what in the hell was going on; I had to ask my wife what sort of prop Eastwood was pretending to interact with. At first, I was desperately afraid it was some sort of toy monkey.

That wouldn’t have been entirely surprising at a convention that had already seen two attendees bounced (or so we were promised) for pelting a CNN camerawoman with peanuts and insults, all for the simple sin of being black. But Eastwood’s choice of foil was worse than some wind-up, wide-eyed Mister Jiggs: The empty chair was the perfect metaphor for a campaign, and a party, that would like to see all record of the first African-American President disappear completely. And if they can’t have that, they’ll settle for replacing that record with their own profane, prejudiced caricature.

“Invisible Obama” isn’t some innocuous morning-after joke about an addled 82-year-old’s ill-advised ad libs. "Eastwooding" isn’t the new planking. Rather, this is a tandem meme that sums up the attitude the modern-day GOP has toward an African-American who has shown the effrontery of acting like he’s the President, all because a majority of the voters ordained him so. Eastwood got to live out the Republicans’ most fervent dreams, first by making Obama literally vanish; then by relegating him to a chair like some errant child; and finally by admonishing him to “shut up” though they had already robbed him of his power to speak. Even the implication that he would dare talk was a waving red flag for this crowd.

Shutting down African-American voices is nothing new for Eastwood. When he was criticized by Spike Lee a few years ago, his response was to tell an interviewer that Lee should just “shut his face.” Why engage with the substance of some younger, darker punk’s critique, when you can just deny his right to utter it?

There’s a pattern here, on the part of both Dirty Harry and the party that hosted him. We often hear complaints from the right that they shouldn’t have to shrink from criticizing Obama just because he’s black -- yet the withering contempt inherent in Eastwood’s routine would never have been leveled at a white president. How do we know this? Because it hasn’t been. The empty chair routine, most commentators have agreed, was sui generis for a major American political party’s national convention; sadly, it may not remain that way forever.

It would have been bad enough had Eastwood stopped at reducing Obama to the Invisible Man of Ralph Ellison’s postulation. But he really gave away the game when he put words in the President’s mouth, imagining that Obama was telling Mitt Romney to “go fuck himself.” That was insulting not just because it was dismissive, but for another reason: because it was inauthentic.

Understand: I’m not one of those white liberals who believe that a standup comic (which is what Eastwood was at least endeavoring to be last night) should never assume the persona of someone of another race. There’s nothing wrong with a cross-racial impression; what’s objectionable is an inaccurate one. If Jon Stewart were to attempt to impersonate Obama by lowering his voice a few frequencies and intoning “Boogedy boogedy boogedy! I’m-a raise me a debt limit,” that would be invalid and offensive. It would assign a stereotypical early-20th-century idea of “blackness” to a man who doesn’t exhibit a shred of it. But Stewart’s impression of Herman Cain was not racist (as Cain subsequently charged), simply because Cain does indeed sound the way Stewart portrayed him to. In fact, I’d venture a guess that Cain has spent quite a bit of time practicing how to sound that way. You live by the shucky ducky, you die by the shucky ducky.

But what Eastwood did was to attribute to the President a kind of gutter discourse that the record doesn’t support. Obama may be an arrogant know-it-all who tells even his self-chosen expert advisers that their ideas are unlikely to be as good as his; there’s certainly testimony to it. But he is not, as far as we have any reason to suspect, someone who tells his detractors to go fuck themselves. Lyndon Johnson likely did, and with punishing regularity; Dick Cheney we know did. But not Obama --not anywhere but in the minds of his highly reactionary enemies.

And there are quite a few of them. Eastwood is not a “unique guy” who “did a unique thing,” as Ann Romney told CBS the following morning, through a mouth no doubt choked with flop sweat. He did just what her party has been doing for three and a half years. And in so doing, he showed the world not only who he is, but who they are. Condi Rice’s Stockholm Syndrome to the contrary, this is the party of old, angry white guys who believe that even their least coherent ramblings deserve the air space we might otherwise dare to devote to a dignified and eloquent African-American.

To which I say: Here’s a chair for you. Now sit on it.

UPDATE: It’s been brought to my attention that the “shut up” comment was not made by Eastwood to Invisible Obama, but “by” Invisible Obama to Eastwood. (For whatever it’s worth, several other outlets made this same mistake, from The Daily Beast to even FOX.) So we’ll move this one remark from the column “Disrespectful Comments Made by White Man to Imaginary Black Man” and into the column “Demeaning, Inaccurate Comments Attributed by White Man to Imaginary Black Man.” Doesn’t change the balance sheet in any palpable way, obviously.