Watch President Obama and the DNC live...hosted by Kumar 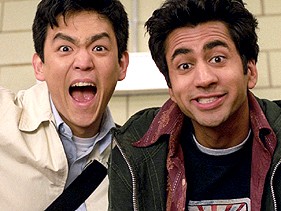 Kal Penn, aka Kumar of the infamous Harold and Kumar movies, will be at the forefront of a livestreaming event Thursday night beginning at 8 p.m. hosted by barackobama.com. When he wasn't riding a cheetah in his movies, Penn became the associate director of public engagement for the White House, but now he has a new role as a co-chair for the re-election campaign for President Obama.

In an email sent by Clo Ewing, director of constituency press for the Obama campaign (she also worked for Oprah back in the day), recipients are encouraged to "RSVP to watch -- and, if you have a question, you can submit it now."

After clicking the link, you're brought to a landing page that tells you to enter your email and zip code.  For some reason my information was already filled in - guessing it was the tracking done from my gmail account.  Or are they onto to me?

On that same landing page, there is a video of President Obama. Let's just say, White Castle may have been eaten during the making of this ad:

Once you fill out your info and get past the video clip, the site brings you to the next page asking you for a donation, but you can just skip that step and close out the window.  Soon, you will receive another email, this time from Obama for America, thanking you for RSVPing.

Or, as I found out the hard way, you can just go straight to barackobama.com to watch the livestream of the DNC along with Kal Penn.  Even if you aren't a fan of Harold and Kumar, this might be the best way to watch the DNC and President Obama's speech without any commercials.