I was going to start off this week with the nonsense that is going on over this awful, awful film clip for The Innocence of Muslims, but the more that comes out about it, the more it feels like a red herring than an actual part of the story. It hit home slightly because I know a bunch of people who knew Sean Smith, but I'd never talked to him myself and I don't know what else to say about it.

Another thing is that our fearless leader Justin Strout is leaving us this week for La La Land and the dreaded Brain Cloud. There was no real reason for him to hire me other than a woeful little film blog of unorganizized brain farts that I kept, but hire me he did, and many panic attacks and nervous breaks later, here I am, keeping a little film blog full of organizized brain farts. My, how things have changed. So, here's good luck to him and may his coattails be long and well tailored enough to hitch a ride on when he makes it.

-It was a little over three years ago now that Alexis Tioseco and Nika Bohinc were murdered during a break in at the house they shared. Their story hurts to read so much, but it's important to keep telling it because it's a beautiful one aside from the heartbreaking ending. Filipino news site GMA compiled a selection of their writings last week. This is the first time I'm reading anything Nika Bohinc wrote, because she wrote, as far as I know, exclusively in Slovenian for Slovenian magazines. (GMA News)

-There used to be a video store in the East Village called Mondo Kim's. It's very much like Stardust, only it was bigger and more insane. But it's since been closed for a few years, and its collection has found its away across the Atlantic ocean, landing in Sicily, where its turned into something of a mob story. A really great read. (Village Voice)

-The first ever color film, created by inventor Edward Raymond Turner, goes on display in England this week. Or you could watch it online. (BBC)

-The days of big money deals for superstar actors may be over, according to Brad Pitt. They never should have existed to begin with. It's not like ticket prices will go down if star salaries do. (Movieline) 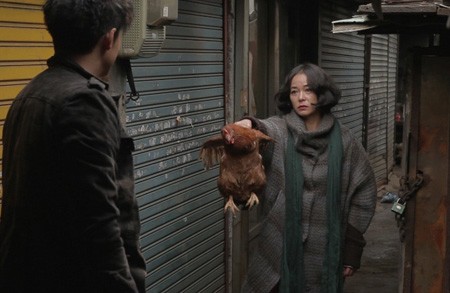 -South Korea has already selected Kim Ki-duk's PIETA as it's selection for the Best Foreign Language Film Oscar longlist. Love and Money probably would have been more accessible. I say that like I've seen either of them, but I've been following both for a long time. (Screen Daily)

-Is Room 237, the new documentary breaking down Stanley Kubrick's The Shining, fair use or copyright theft? WB will come off looking like a bunch of dickheads if they try and squash the film even if it is a murky misuse of their footage. (IndieWire)

-What was the young Paul Thomas Anderson like? Kind of old, but well worth the read. (Esquire)

-A bit of analysis on why Tom Rothman decided to leave Fox. (THR)

-Chaz Ebert started a blog. Well worth a read. (Musings About the Movies)

-It wouldn't be a good week without a Jaws link, so here is a video of Peter Benchly hosting a preview of the film. It appears to be the first segment of a longer film, but gets cut off. Still interesting, full of on set interviews that I've never seen before. (Vimeo)

-The Thick of It is back for a fourth season, finally, so celebrate with Peter Capaldi's short film Franz Kafka's It's A Wonderful Life. (YouTube)

-DVF Through Glass, a short of one of Diane von Furstenberg's Fashion Week shows shot with Google Glass. I particularly love the whoops, hair in the shot look. It can be the new shaky cam or bleach bypass. (NY Times)

-Satellite Boy, the underdog story of an Aboriginal boy who lives with his grandfather in an abandoned drive in movie theater that is about to be torn down to make way for development. Stars David Gulpilil from Walkabout too. (Twitch)

-Mama, a dark horror produced by Guillermo Del Toro with Jessica Chastain, who is back to being in every movie ever. (Apple)

-Takeshi Miike's Lesson of Evil, about a killer teacher. We still haven't gotten his last film, For Love's Sake, yet. (Twitch)