“The Dead Zone” redux: End of the line for Romney?

September 19, 2012 at 4:28 PM
comment
This isn’t the sort of revelation that puts you in line to be the next David Gregory, but what the heck: Most of what I know about politicians, I learned from Greg Stillson.

Stillson, you may or may not recall, is the antagonist of the Stephen King book and movie The Dead Zone. He’s a sadistic traveling salesman turned political candidate, riding a wave of populist discontent to the U.S. Congress. Stillson’s stump routine consists of donning a hard hat and charging around the stage like a bull, which is how he promises he’ll run through the fat-cat bureaucrats in Washington.

His supporters consider Stillson a folksy breath of fresh air. To Johnny Smith, the precognitive hero of The Dead Zone, he’s something far more sinister. Stillson’s path, Johnny foresees, leads all the way to the Oval Office, from which this unlikely Commander in Chief will one day launch a nuclear war. Just because he can. 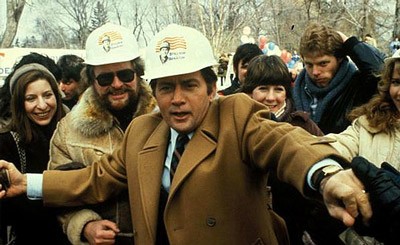 When the book was published in 1979, it was easy to construe the Stillson character as a symbol of the reactionary anti-intellectualism that was about to put Reagan in the White House. (The film version was released in 1983, three-quarters of the way through the Gipper’s first term.) The ensuing decades, however, have brought a procession of ever-more-Stillson-like politicos -- a line of de-evolution running through Dubya to Rick Santorum to Allen West to I don’t wanna think about it. Every time one of these demagogic dopes emerges on the national stage, I kick myself for having squandered the Stillson analogy on the last one. God only knows how King himself must feel about it by now.

The narrative of The Dead Zone is a riff on the old “Would you kill Hitler?” conundrum, with Johnny Smith realizing he has to assassinate Stillson to save the world. Technically, he fails: His bullets don’t find their mark. But King’s brilliance as a plotter was to recognize that a sociopath like Stillson is as dangerous to himself as he is to everybody else. When he hears the first blast of Johnny’s rifle fire, Stillson instinctively snatches a baby out of the hands of one of his nearby supporters and holds it aloft like a tiny human shield. Cameras capture the obscene tableau for posterity; “End of the line for Stillson,” the headlines read.

I think of Greg Stillson almost every time I look into the cold, dead, unfeeling eyes of Mitt Romney. I find myself wishing that someone would just toss him a Betsy Wetsy, fire up an audio recording of a 21-gun salute and let nature take its course. But Romney is a more efficient manager of his own downfall, needing no Johnny Smith to effect it for him. Surely, using a national day of mourning to blame a bunch of slain American diplomats for their own murder is a Greg Stillson moment of the highest order -- isn’t it? And what about being captured on tape declaring that just under half our population consists of shiftless bums who are beneath your regard? Isn’t that a Greg Stillson moment, too (or, as my wife points out, its spiritual forbear: a Lonesome Rhodes moment)?

A vast portion of our national press seem to think so, which explains the recent deluge of “Romney just lost the election” op-eds. But the sad hilarity of seeing a new one of those editorials published every day, always in reference to some  fresh new self-shaming, makes me think that the concept of a “Greg Stillson moment” may be hopelessly passé. Romney has spent weeks now on an apparent quest to destroy his candidacy, his future and his good name. Yet there he is, still within striking distance of the President in the likely-voter polls.

The most convenient explanation is that our electorate has become so bitterly divided that any nominee of either of the major parties is always going to enjoy at least 40 percent support, no matter what he does to make himself a pariah. But that theory addresses only the symptom, not the disease. Simply put, neither Stephen King nor Johnny Smith could have predicted the rise of a 24/7 propaganda machine that’s dedicated to propping up guys like Romney every time they do something that would otherwise alienate them from all but the most rabid members of their base. Were a real-life Greg Stillson to have a baby-brandishing moment of his own, Sean Hannity would be on the air almost immediately to change the subject. Planned Parenthood victimizes more innocents every day, he’d rationalize -- so who’s the real menace here?

And so the Romney train gets to move ever onward, from station to station of disgrace, yet never reaching the end of the line. That’s how we travel nowadays, here in the “no-spin” dead zone.