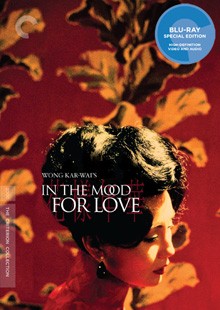 This week was all about Criterion's beautifully done bluray edition of Wong Kar-wai's In the Mood for Love for me. It is, as far as I can tell, flawless -- just like the film itself.

The picture is crystal clear without a spec of blocking, artifacting, halo or flutter. The one spot I thought might have been a little bit of edge flutter was actually Maggie Cheung standing in front of a oscillating fan with a light behind it.

The disc expands upon the original DVD release with two new interviews with Hong Kong cinema expect Tony Raynes and a new booklet featuring an essay from Steve Erikson as well as the original short story that inspired Wong Kar Wai's second take of the film, "Intersection" by Liu Yi-chang (which was in the DVD booklet as well).

Of course it's about the film itself and the story holds up no matter the quality of the image, but it's a sumptuous film that deserves the best attention to detail that is humanly possible, and until we move on to 2k HD, this is just that. Criterion have outdone themselves here, even if it took them a few too many years to finally get around to it.

-These guys are way too optimistic about the prospect of the South Korean film The Thieves, I think. I just can't see it playing like Crouching Tiger or Amelie here. Psy is huge right now, no doubt, but Rain and Girls Generation are pretty big here too and have been for a while (Girls Generation are actually the subject of a feature article in The New Yorker this week), and past Korean box office leaders like The Host barely skipped over $2m. The Brotherhood of War, another box office leader managed only $1m at the North American box office, while Oldboy couldn't make it to $15k even with Tarantino's name plastered all over it (it was really one of the more surreal theatrical experiences I've ever had as an elderly couple asked my friend and I to explain the end to them). And really, they're not giving my cover story on Korean film from a few years ago enough credit for this hallyu bump. Cough. (THR)

-Ethan Hawke on the possible end of Jesse and Celine's story in the recently completed-in-secret Before Midnight. (Collider)

-Until now, the most famous movie Libyans were probably the terrorists who buy Doc's pinball machine parts bomb in Back to the Future, but since the fall of Gaddafi a cinema culture is beginning to brew. (Guardian)

-Not a real big surprise: The Wizard of Oz is getting the 3D treatment. (CinemaBlend)

-You guys are going to want to learn how to use proxy servers so you can access the BFI's online player when it goes live. (Guardian)

-Studio Ghibli and GKIDS are finally putting an English dub cast together for Goro Miyazaki's From Up on Poppy Hill. They should just release it subtitled. It's not going to be a hit with little kids, it's a teen shojo with Hayao Miyazaki's involvement limited to co-scripting. Disney isn't even distributing it and they're losing ground for what should be their key demographic by the fact that it's already been released on bluray in Japan and fansubbed online. (Thompson on Hollywood)

-Awesome miniatures work on this Bollywood rip off of Jaws. (io9)

-Is Mila Kunis the sexiest woman alive? Esquire thinks so. I don't necessarily agree she's the sexiest, but can't find a good argument against either. (Esquire)

-Payload, a dystopian short about the space elevator, which is a novel, but impractically expensive idea. (Twitch)

-Brooklyn Castle, a doc about a junior high Williamsburg that has won more chess tournaments than any other school, even with the oppression of poverty, hipsters and bed bugs overrunning their neighborhood. (Apple)

-David Chase's first post-Sopranos piece, Not Fade Away. Could be good. (Apple)