October 10, 2012 at 2:02 PM
comment
Hey, so everybody's all atwitter about the poor guy who died in a cockroach-eating contest in South Florida. All so he could win a free python. We hear you can practically catch those things in the wild these days, which makes his story particularly depressing. While everyone's waiting to hear what really killed poor Edward Archibald of West Palm Beach – Did the cockroaches eat him from the inside out? Did he die of natural causes? Other people have survived after eating cockroaches (see videos below)? WTF? – we've compiled some fun facts about cockroaches for you to ponder.

1. In some places, cockroaches aren't just eaten to gross people out – they are eaten because people think they are delicious. And they can be served, sushi-style, on rice.

2. Cockroaches have been trained to salivate in response to stimuli, the same way Pavlov trained his dogs ... in other words, you can train a cockroach. Here's a video of a giant cockroach "trained" to run an agility course. 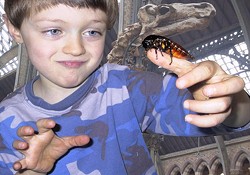 4. Cockroaches can live for weeks after their heads are cut off.

5. Cockroaches do sometimes bite people, but the wounds they leave are rarely serious.

And finally, because it's after lunchtime, here are a few videos of cockroach eating contests from around the web.

A cockroach-eating contest at a Renaissance Festival: