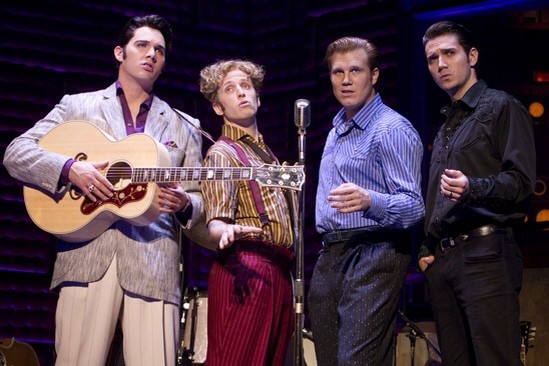 The Avengers taught us that if one hero is super, four must be fabulous. Million Dollar Quartet, the current offering in the Fairwinds Broadway Series, makes a strong case that the same is true for rock & roll royalty.

Director Eric Schaffer's swiftly-paced single-act musical (which started life at Florida's Seaside Music Theatre) is a historical fiction loosely inspired by the legendary Sun Records recording session of December 4, 1956, when genre founders Carl Perkins (Lee Ferris), Johnny Cash (Scott Moreau), Jerry Lee Lewis (Martin Kaye), and Elvis Presley (Cody Slaughter) jammed together for the first and last time. The Nick Fury to this musical dream team was producer Sam Phillips (Christopher Ryan Grant), who discovered and nurtured some of the 20th century's biggest stars, then watched as they departed and got rich without him. (Don't feel too sorry for him; he was also an early investor in Holiday Inn.)

The recent jukebox musical rage has resulted in shows good (the graceful Jersey Boys and juvenile but genial Rock of Ages), bad (Hot Feet, Good Vibrations) and ugly (the mystifyingly popular Mama Mia). Million Dollar Quartet rises above the median by largely sidestepping the subject where most similar shows slip up -- storyline. The majority of the show is a straightforward concert presentation of the era's top songs; rather than reproduce the session's obscure playlist, each singer is allowed to essay their greatest early hits, from "Blue Suede Shoes" (originally written and recorded by Perkins before Elvis immortalized it) to "Whole Lot of Shaking Going On."

The entire cast goes far beyond "Legends in Concert" impersonations into impressive embodiment, on top of being top-notch musical technicians. Kay is the standout, capturing Lewis' kamikaze keyboarding and comical cockiness; Moreau's bass vocals on "Walk the Line" are eerily accurate, and his attitude is more jovial than Joaquin's; and though Slaughter overdoes the cliche cocked eyebrow, his pelvis is appropriately limber. Since he never earned big-screen biopic, I don't know Perkins well enough to judge Ferris' bitter liquor-loving interpretation, but he's a hell of a guitar player. Even the rhythm section is stellar, especially Jay Perkins (Chuck Zayas) who spins and flips his upright bass like Townshend's stratocaster.

Unfortunately, the play is less successful when it deviates from the core of the quartet performing. Dyanne (Kelly Lamont) is a generic female character vaguely based on Presley's girlfriend Marilyn Evans who exists only to sing a couple songs and allow other characters to spout exposition. A thin thread involving Phillips trying extend Cash's contract while deciding whether to sell out to RCA add a sliver of drama to the denouement, but most of the underwritten dialogue just interrupts the music's momentum. Phillips' life deserves a more thorough telling, but this show doesn't really let loose until his studio walls literally fly away for the Vegas-sparkly encore.

When it does, it recaptures a bit of the soulful rebelliousness that Elvis et al appropriated from their African-American predecessors, before corporations safely repackaged it for white suburban teens. The King may have left the building, but for this week at least, his spirt is still shaking the Bob Carr.