On Friday, Nov. 2, more than 50 protesters rallied in the northwest Orlando parking lot of Florida Outdoor Equipment, a wholesale distributor of outdoor power equipment in Florida, Georgia and part of Tennessee. The group was made up of members of Organize Now and the Community Business Association of Central Florida (organizations behind the recent attempt to get a sick-time initiative on the ballot this November), and they had gathered to protest the “I Built My Business” bus tour that’s been working its way through swing states in the weeks before the election. The tour is being sponsored by the National Federation of Independent Business, which claims to be the nonpartisan voice of small businesses in the nation; but the protestors were there to point out that the organization is actually just another lobbying group with deep ties to special interests and the Republican Party. On one side of the parking lot, protestors marched in circles and changed about how the organization received millions from Crossroads GPS, an organization affiliated with Republican strategist Karl Rove, as well as other organizations tied to the controversial American Legislative Exchange Council (ALEC) and the infamous Koch brothers. The organization’s president, Dan Donner, is not a small businessman at all, but a former lobbyist for the steel industry who now makes more than $700,000 a year to lead the National Federation of Independent  Business. On the other side of the lot, Republican Congressmen Dan Webster and John Mica addressed a small crowd and endorsed Romney and other local political figures running for seats this election. Policemen barred the protestors from coming too close. 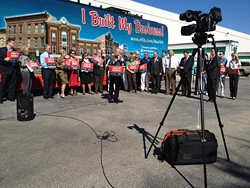 “This is a sad state,” Mica told the audience, referring to the many vacant businesses he said he’s encountered while driving in his district. “Our Congress has failed to enact policies that encourage small businesses, but with proper changes we can pick the future for America.” The protestors say the future that the National Federation of Independent Business represents is more in line with the interests of large corporations than small businesses.