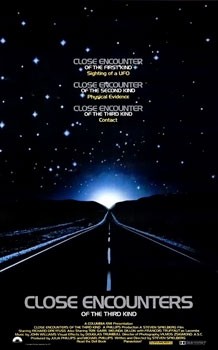 Thirty five years ago today, Steven Spielberg's jaw dropping b-movie classic, Close Encounters of the Third Kind, was released in theaters. No one knew what the hell a close encounter was, but they quickly learned as they watched Roy (Richard Dreyfuss) and Gillian (Melinda Dillon) search frantically the kidnapped little Barry (Cary Guffey), culminating in the stunning 30 minute light and sound finale, affectionately known as "the light show". Since I started making stupid all-time lists (not all that long ago because they're really stupid), there have been two mainstays at the top: #1, Fanny and Alexander, and #2, Close Encounters of the Third Kind. Numbers 3-10 have fluxed wildly depending on the mood I was in when I wrote the list out, but #1 and 2 have remained the same. They're not films that seem to have that much in common on their face, but they share similar themes of family and abandonment, and are both just slightly left of reality as we know it. Close Encounters has its aliens, Fanny and Alexander has its ghosts and mysticism. Of all of the great films that have been made and that I've seen in my life, I've always found it funny that a TV movie and a B movie are at the top of the heap for me, but it's been persistent. Francois Truffaut's Shoot the Piano Player is never far behind in the list (#3 right now), and I've always loved Criterion's description of it, that Truffaut was drunk on the possibilities of cinema.

The same idea goes for Close Encounters. Just off of the impossible success of Jaws, Spielberg had the backing and leeway to be drunk on the possibilities of B cinema. As it ended up, he was more the puppet master of the film than its director. It's an incredibly manipulative film (especially playing out the scares and scary light of kidnapping of a cute little kid), but its manipulative in the best way possible. This week in THR's writer's roundtable, Michael Haneke rightly cited the Auschwitz gas/shower scene in Schindler's List as being unbearably manipulative in the worst possible way, but, perhaps because there is less at stake in Close Encounters, Speilberg's manipulation comes off more as a gentle nudge in the right direction for the maximum amount of experience than anything else. It's perfectly acceptable to manipulate in B cinema. Sleight of hand, and devious editing and blocking are part of the experience. The goal is to thrill you and sometimes the suspension of disbelief needs to be stretched to the point right before it breaks before you can achieve that. Stretching the bands of the suspension of disbelief is Spielberg's real talent in the filmmaking world. Even though he's had them snap on him (1941, for example), they've snapped remarkably few times for a man who has been making high end blockbusters for 40 years. Guy's like Michael Bay and Paul W.S. Anderson don't even bother with playing with the suspension of disbelief. You just have to ignore the ridiculousness in their films. If you don't, then fuck you. Whereas you walk out of the theater or turn off the DVD really feel like E.T. or T-Rex exist out there somewhere. It makes Spielberg's films, especially the ones made before 1985, easy to appreciate wholly without any reservations. Bob Balaban is another great story of the film. Literally, through the publication of the diary he kept during shooting, Spielberg, Truffaut & Me, that chronicles his experiences with the film: from panicking about not actually knowing the French he said he did, the uncomfortable stay in India, and being the bearded one constantly getting mistaken for Dreyfus, who was often standing next to him, clean shaven and thus invisible. In producer Julia Phillips' bridge-burning autobiography, You'll Never Eat Lunch in the Town Again, stories of the film are dished as well. She speculates about whether Truffaut's hearing aide was just for show so he could escape conversations, and the real childlike nature of Spielberg when a kiss she gives him outside of the Alabama zeppelin hangar where "the big set" was housed embarrasses him so much.

George Lucas was so afraid that Star Wars would not gross anything and he's be ruined, he traded Spielberg 2 1/2 points on Star Wars for 2 1/2 points on Close Encounters. Lucas has probably done pretty well off of those points with Close Encounters' $300+M gross, but not as well as Speilberg did on Star Wars' $1+b gross over the years. Somewhat surprisingly, Spielberg took his name out of contention to direct the new Star Wars film being written by Michael Arndt. After Kingdom of the Crystal Skull, maybe they needed a long break from working together. With each new viewing the film only grows in my mind, especially for its masterly special effects, done by a team led by effects whiz Douglas Trumbull, not to mention the fact that almost everything is a set (designed by Joe Alves), including the dark side of the moon, which had to be built in a zeppelin factory, and even extended out of the bay door with duvetyne, the blue screen of the day: practical, easy to optically "paint" over. Today it would have been a green screen and digital paint, as would every one of the space ships. No one would have wondered, "how did they do that?" But 35 years later, I still sit with wonder for this film. We'll just pretend the 1980 special edition never happened.