Yesterday (Saturday 11/17/12), two significant seasonal celebrations were held in the Orlando area, and the Orlando Weekly was there at both to show our support for the community.

The day began at the Winter Park Harvest Festival, which drew a large crowd to the west meadow of Central Park for food trucks, folk music, and organic-oriented vendors. The event, which was sponsored in part by the Orlando Weekly, featured DIY cooking and gardening demonstrations, and a display of garden boxes nurtured by local school groups.

Later that evening, Ivanhoe Village lit up for the 16th annual Jingle Eve open house. The evening kicked off with the traditional parade of illuminated watercraft along the shores of Lake Ivanhoe, and continued with entertainment up Orange Ave to Princeton St, and down Virginia Ave to Mills. Orlando Weekly sponsored the beer garden and live music stage next to BlueStar's The Venue, and a 12-stop prix-fix wine stroll was also offered. Ivanhoe Village resident and board member Gordon Spears told me that the successful neighborhood-wide event may spin off a separate spring event starting next year.

Check out our gallery of images from the day, and look for more OW-supported events around town in the months to come. 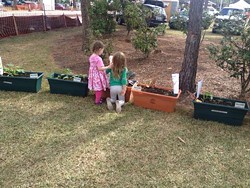