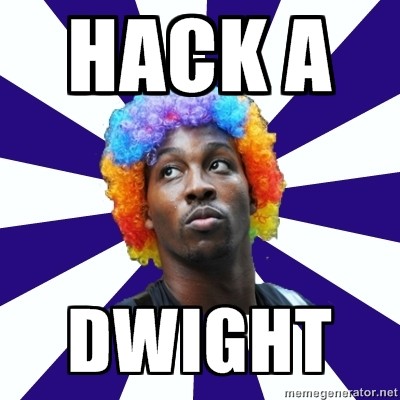 HOLY CRAP! Last night was the first match-up between the Magic and Lakers, who finally took Dwight Howard out of this town and ended the excruciating Should-I-Stay-Or-Should-I-Go-Now drama of last season. But what happened last night took this saga from TNT into straight-up Disney territory because the underdog Magic team, (led by Arron Afflalo, my personal favorite Magic player Jameer Nelson, and following a pace-changing three sunk by JJ Redick), took that shit by storm starting in the third quarter with a strategy anyone who watches Magic basketball knows all too well. Hack-a-Dwight. Only this time, it was working to the benefit of the Magic.

Everyone knows Dwight can't make his free throws. He's the worst. And so it's not uncommon in the last few minutes of a close game for the opposing team to start fouling Dwight to put him on the line and stop someone like, say, Kobe Bryant, from taking back the game. But here's what was hilarious about last night: The Magic started whacking Dwight in the THIRD QUARTER. We're not talking about a desperate-times, desperate-measures strategy here. Consider all those fouls to be slaps on the wrist for each press conference you bumbled, Dwight.

Here's something. In NBA.com's Rival Report, Dwight insists that the game wasn't emotional. In fact, he says it twice. For someone who stalked off the court and didn't even shake the hands of any member of his former team, it's kind of hard to believe that: "It's not emotional. It's not emotional."