December 13, 2012 at 12:30 PM
comment
Back in the ’70s, there was a TV commercial for a vinyl compilation of great themes from classical music. These weren’t just any randomly selected masterpieces, but ones that had been featured prominently in Hollywood films and other popular media. Hence the presumed appeal to us uncultured, Late Show-watching types.

The commercial was narrated by an actor playing an English gentleman’s gentleman (and whose accent, I always suspected, shifted from Oxford to East Bayonne as soon as the cameras stopped rolling). He delivered his spiel from a cramped soundstage that consisted of a fake brick wall, a fake full-size harp and a (probably) fake marble bust.

The comedian Robert Klein did a great routine about that ad. He said that it represented the way poor people think rich people live: with nicer stuff, but no greater square footage to house it all in.

Yes, it can be hard to imagine how the other half lives. But it’s also difficult to manage the way others think you live.

Take the curious phenomenon of the Mitt Romney sightings that are being documented all over the Web – some in the form of spurious tweets, but others supported by real, photographic evidence. Mitt gassing up at a service station! Mitt shopping for cereal at the drug store! Mitt lounging in front of the TV, sparking up a doob to celebrate Washington’s legalization of weed! (OK, that last one didn’t happen – yet.)

Obviously, something is going on here. But what?

There’s a conversation taking place at Talking Points Memo, and I hate to say it, but I think their editor and publisher, Josh Marshall, is missing the point:

Part of what gets my attention about these photos — and perhaps others are the same way — is that Romney seems a lot more normal in his political afterlife than he did before November 7th.

Oh, right. Like “seems” isn’t the million-dollar word there. Reader “TB” hits closer to the heart of the matter:

[R]ich folks, in business or in Hollywood, don’t “lose” and then go home. They hire consultants who specialize in recontextualizing their only apparent losses, and rehabilitating their temporarily distressed images.

Of course. It’s a P.R. campaign. But I even balk at the notion that it’s a campaign Romney paid anyone else to devise. That just isn’t his style. All through the summer, we heard that his presidential bid was floundering because he was listening to the wrong advisers; in September, we heard his fortunes were turning around because he was seeking greater counsel from his wife and kid. But clearly, it was him making the decisions all along. The entire campaign had the earmarks of a vanity run conducted by somebody who has always been too rich to receive any honest criticism – and who thus has no idea how he’s coming across outside his own head.

To return to the TV-commercial theme, I think of some wisdom I once received from a friend who had worked in video production. Ads for local businesses, he said, don’t suck because the business owner can’t afford to hire professional on-air talent; they suck because nobody has the guts to tell him he isn’t the most effective mouthpiece for his own product.

That’s the tragic failing we saw all year long as Mitt and Ann Romney tried over and over again to humanize themselves in the public eye. Instead, they only succeeded in reinforcing how out of step they were with mainstream society, and how wrong they were in thinking they could make us think they were just like us. 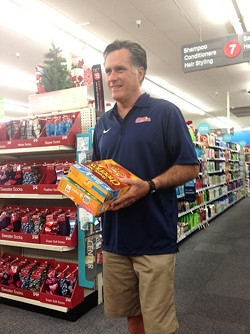 At least the media could be duped. Remember CNN’s Gloria Borger being surprised to arrive for a scheduled interview with Ann and find her doing her own laundry in four big machines? Remember Ann’s explanation that she had knocked off 12 loads, but that sort of domestic duty is par for the course when you have five boys? The youngest Romney son, Craig, is 31 years old. Those kids must have left a hell of a mess.

The Romneys’ tone-deafness was at its most acute when they tried to engage with popular culture. Mitt and Ann may not have been lying when they said Modern Family was their favorite TV show, although they sure didn’t grasp the irony that Mitt’s policies would deny “family” status to three of its main characters. (Fortunately, the program’s creative staff pointed this out, loudly and publicly.) But when Mitt said on Live! With Kelly and Michael that he admired Snooki’s “spark-plug personality,” he was obviously just makin’ stuff up. He clearly had no idea who she is or what her programs are really like. Unless, that is, he was attempting to ace that time-tested poll question, “Which candidate would you rather get pants-wetting drunk and wake up in the tank with?”

As for his claim in the same interview that he sleeps in “as little as possible” – well, it was just creepy to hear a Presidential candidate give the same answer to that question that I had heard David Lee Roth give live on the radio in 1986.

My skin crawls in a commensurate fashion whenever I see another of those new ”Mitt about town” pics the TPM gang is fascinated by. I’m struck by how weirdly off-key most of them are. Does anybody think they’re not staged (or at least permitted by Mitt, which is just a different type of staging)? Almost all of them look posed and not candid – they are to paparazzi shots what Storage Wars is to Frederick Wiseman. Even the mussed hair Josh Marshall seems so struck by is only “out of place” in the sense that Superman’s 'do just won’t behave. (Also, notice that in the “cereal shopping” pic, Mittens is actually emerging from the “Shampoo, Conditioners and Hair Styling” aisle. Gotcha!)

Is this actually going to work? Is anybody going to see Romney as a regular Joe for pumping his own gas, when they know the car is just going onto an elevator with six or seven others? On some level, the infamous Thanksgiving pic of Mitt and Ann in the kitchen has already been debunked – not just by the widespread suspicion that Ann doesn’t cook her own meals, but by the subsequent revelation that the family had ordered Boston Market this holiday instead. (Time to get your folksy cover stories straight, people.) And once again, notice how creepy that pic looks: It was meant to convey honey domesticity, but the combination of Ann’s awkward grimace and Mitt’s exaggeratedly affectionate chokehold on her makes it seem as if he’s about to throttle the one person in America he hasn’t yet blamed for his loss.

(No wonder she looked pained: In the weeks following the election, confidantes told the Washington Post, Ann was feeling devastated by her family’s failure to realize her their “destiny” of ascending to the White House. She was doing a lot of crying, they said, and trying to get back to riding her horses.)

So Mitt really wants us to think he’s a man of the people after all. But why? Another TPM commenter, “TH,” surmises that he’s preparing himself for a stint as an author and lecturer, and needs to do some image rehab first. But I think that, also, is a fundamental misreading, or just a case of overthinking. I don’t believe Mitt’s built-for-Instagram flailing has any concrete purpose – at least not one he could identify.

To paraphrase Orwell, the purpose of publicity is publicity. Mitt Romney is a guy who has lived his entire life under the assumption that he’s someone strangers should give two very big shits about. Just because. Admitting to himself that nobody really does give those shits would hard for him. It would be a lot harder than simply refraining from combing his hair, putting on a pair of shorts instead of the suit that fits him like a second skin, and heading on over to CVS to make like a Cheerios junkie with those filthy little 47 percenters.

The good news for him is that he doesn’t have to try so hard. If he’s that desperate for attention, he can always just fire somebody.