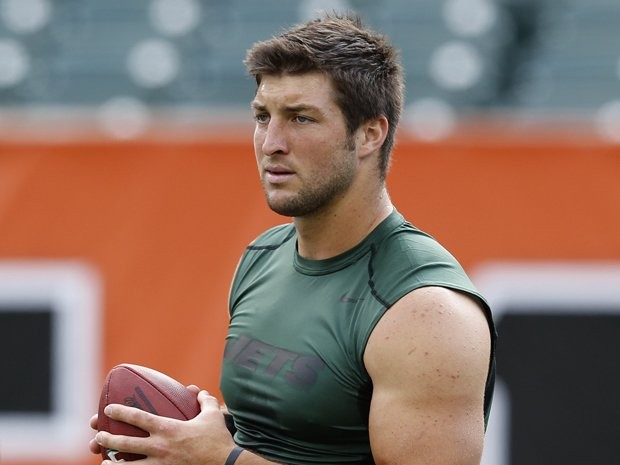 Good news for Gator faithful and Tebow proselytes everywhere: the onerous task of shouldering the Jacksonville Jaguar fandom mantel (sorry, Jax fans) is not in your future, after all.

According to an ESPN.com report released today, the Jaguars’ new general manager David Caldwell didn’t waste any time squelching Tebowmania Part II, stating during his introductory news conference that “I can’t imagine a scenario in which he’ll be a Jacksonville Jaguar -- even if he’s released.”

Jaguars owner Shad Khan vocalized his support for Caldwell’s decision, insisting “It’s not my decision. I want to do whatever to help this team win. Who the players are is really the general manager’s and coaches’ -- it’s a football-side operation decision. It’s really not my decision.”

The Tebow Clamor Machine awoke to feed when sources close to the Jets, who acquired the quarterback from the Denver Broncos last year, virtually guaranteed the former Heisman winner’s release from the team this offseason. Apparently head coach Rex Ryan would rather starting QB Mark Sanchez throw interceptions than Tim Tebow pass at all. Sanchez finished 2012 dead last in Total Quarterback Rating, committed 30 turnovers, and enriched the pro football lexicon for all of us with his infamous “butt-fumble” against the New England Patriots. Here is a Deadspin article about the custom "butt-fumble" jerseys inspired by the immortal play, because Jets fans are bitter and awesome. Conversely, Tebow took a paltry 75 snaps, often as part of a ballyhooed wildcat package that never reached fruition. The Broncos offered him trades to the Jets and Jaguars following the 2011-2012 season, with Tebow choosing New York over Jacksonville because he reportedly believed his shot at earning the starting QB spot was best in MetLife Stadium.

Is Tebow a franchise-caliber quarterback, or even a proficient passer? No. But Tim Tebow is a home-grown product of Jacksonville and a local hero: a two-time National Championship winner at the University of Florida, and one of the most successful and electrifying college players in recent memory. If anything, signing Tim Tebow could pack EverBank Field again and retire those embarrassing stadium tarps to that cavernous warehouse from Raiders of the Lost Ark. Tebow’s jersey was also ranked the eighth best selling in 2012, despite his absence from the field and his teams' utter derpitude, but who's counting? And that's just the financial incentive for the Jaguars. The Jacksonville Dumpster Fires (again, sorry Jags faithful, and you certainly are that) are home nursing their 2-14 record this postseason.  Yes, the argument is reaching Skip Bayless-level redundancy, but Tebow’s miraculous late season run with the Broncos and post-season playoff victory against the Steelers indicate that, if Tebow were to arrive in Jacksonville, woeful starting QB Blaine Gabbert would be looking over his shoulder quite a bit once training camp start.

Tim Tebow’s backup status is usurped by third string QB Greg McElroy, and now this. It’s the latest blow in the Gator great’s plummet from first round draft pick to special teams blocker and NFL pariah. Of course, Jaguar ownership could be playing coy here, indeed harboring interest in Tebow but indicating otherwise for some bizarre reason. After all, Gator fans know a thing or two about the disingenuous sports figures (wasn’t that Meyer-something hot dog person coaching at Florida once?). Everything should shake out over the offseason, and we’ll know for certain where Touchdown Timmy is headed.