Let's Spend the Night Together - Hal Ashby (1982) By the time the Stones launched their Tattoo You stadium tour of America in 1981, the first tour of its kind, Hal Ashby, the New Hollywood director who was as legend for his drug intake as he was for films like Harold and Maude and Shampoo, was slated to be directing Dustin Hoffman in the cross-dressing comedy, Tootsie. Complications with his contract with Lorimar Pictures -- namely revenge over Ashby's last film, ironically called Lookin' to Get Out -- quickly put an end to that before it got started, no matter that Hoffman courted Ashby in full drag to do the picture. Jagger and Ashby had tried in the past to get a project going together, an adaptation of Gore Vidal's Kalki, and when the band decided to make a concert film of the tour Jagger went to Ashby for suggestions. Ashby's first suggestion was Hal Ashby. And it made sense: Ashby was known as one of the finest editors to ever put his hands on a flatbed editor, and directing a concert film is half filming, half editing. While Jagger was in high spirits and engaged in the project, the rest of the band were not all that thrilled to be involved with another film, especially with the negative feelings they had over Gimme Shelter. Richards especially wasn't keen on the extra commitment, and according to Life, was tired of the size of Jagger's ego at the time. On the scoreboard behind the band at the beginning of the film, Jagger's name is billed singularly next to the band's name -- not exactly "MICK JAGGER AND THE ROLLING STONES", but close enough to rankle with the rest of the band, like "Puppet Show and Spinal Tap". 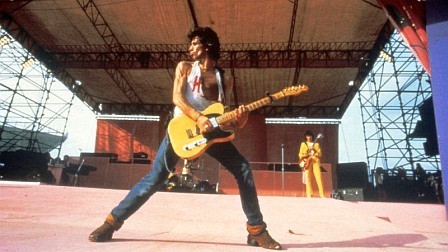 As far as straight forward concert films go, Let's Spend the Night Together is a great document, featuring an even setlist of "new" (for the time) and classic songs. On the DVD cover it's listed as "the greatest hits live", which is a bit offputting for some reason. But the film itself is a celebration of the band, one that highlights the great atmosphere the band create behind and on stage, even if it wasn't documenting the Stones at their best. Jagger may have been documented at his best, but I don't think he's ever had an off night in 50 years. He's always at his best, and he works the 60,000 people in Sun Devil Stadium and the 20,000 in the Meadowlands, NJ with skills that few people have ever had. Jagger and dictators are the only ones with the kind of sway over large crowds that are in evidence here. Maybe he deserved the billing after all. The film is made up largely of the third night of filming, at Sun Devil Stadium in Arizona. Ashby directed the concert that night from a hospital bed next to the bank of video monitors, an IV stuck in his arm. Partying with the Stones, especially back then, was serious business and even Ashby, who was known for his all day and editing-and-coke binges, felt the experience a little more than he likely expected. (For the sake of fairness, I should note that others say he just had the flu.) Whatever the case, when the legend becomes fact, we print the legend, and if the Stones (in the fans eyes anyway) are about anything, it's the legends.

Shine a Light - Martin Scorsese (2010) It was only fitting that Martin Scorsese eventually film some kind of documentary with the Rolling Stones. He's been using their music in his films as far back as Mean Streets (1973), so it's even more fitting that his would be one of the best concert films. But it's very straight forward: it's a show. Scorsese shows a little bit of behind the scenes bits here and there, stuff about how to shoot the concert and some clips from other documentaries (including Charlie Watts' bit about being wonderful), but it's just a concert film. It stands as high as it does on the song selections -- a good mix, including some of my favorites like Just My Imagination, Shattered (which is much better than the version on Some Girls), You've Got the Silver and the titular Shine a Light -- and the quality of the performance. For a bunch of old geezers they never stopped being able to rock the fuck out, and they only got better once they all cleaned up, even though they got older. They are freaks of nature, especially these four. There are plenty of concert films I've skipped over in this series, both theatrical and home video (some of the home video ones, like Some Girls: Live in Texas, were intended for the theater and then shelved for years), not to mention bootleg videos. A band that survives half a century tends to acquire concert films like normal people acquire furniture and gray hairs.

Going all the way back to Charlie is My Darling, they show a great progression of a great rock band finding their place in the world, finding a sound and then continually reinventing that sound over the course of decades. The guts to reinvent the sound of the band so many times, and so drastically sometimes, is something most bands don't have, which is why most bands get stale and die out. The risk is great though. A band like Metallica shed a lot of fans in the 90s hen they began experimenting with new styles of musical expression, and shed even more when they changed again in the 2000s. I'm sure the Stones have shed fans over the years as well, but they always managed to keep it working through the years, even when the albums didn't make it. It's a remarkable achievement. NEXT: Gold rings to you all