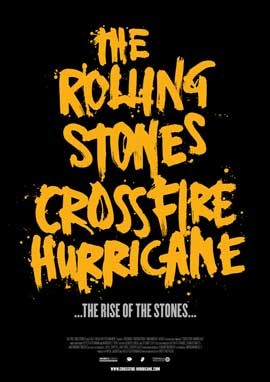 Crossfire Hurricane - Brett Morgan (2012) Another cross-project of the BBC and HBO, Crossfire Hurricane is essentially the Forty Licks of Rolling Stones documentaries. Every film I've spoken about thus far -- and plenty I couldn't get to -- are spliced, cut up, borrowed from and sampled by Brett Morgan to create this greatest hits documentary. While being both thorough and authoritative, it also somewhat oddly stands as a non-definitive document of the history of the band. Much is glossed over or simply not covered, but to cut 50 years of existence down to 2 hours, much has to be glossed over. In the 70s, after the dual disasters of Gimme Shelter and Cock Sucker Blues, the band was less keen on travelling with a camera crew, so Morgan had less archival material to work with. It has the unfortunate side effect of essentially making Ronnie Wood an afterthought. He really did become a member of the band after they finished their most interesting periods of excess (or at least as they were winding down from the interesting parts of being excessive). Another thing to consider is the fact that the best stories from the road are almost always in locked hotel rooms with a few people and no cameras. Cock Sucker Blues was very much the exception, where cameras were welcomed into the room as people did drugs and fucked, but you've never seen that from any other band -- you're not even supposed to see it from the Stones, per court order.

Even with the problems inherent to the format Morgan chose, I thought it worked as a film. It wasn't a whole lot of new stories for me, though there were a few in the audio interviews recorded specifically for the documentary, but I've read an awful lot about the band and seen all of their films and most of their concert videos. To someone who hasn't, I'm sure it was full of great stuff, and would either pique the interest to dig further and get deeper into the band, or satisfy the interest of a casual fan. Brett Morgan really knows his way around the editing room as he proved earlier in the Bob Evans documentary The Kid Stays in the Picture and the ESPN 30 for 30 documentary, June 17th, 1994, both of which capture something special about their subjects. And he captures what is special about the Rolling Stones here as well, even if he missed out on the Butter Queens and Plaster Casters.

And so we come to the end of the road of this appreciation of the long film history of the Rolling Stones. The've always been one of the most visually recorded bands to ever exist in the world. Between their feature films, thousands of photographs, an early adoption of the music video, pay per view concerts, and original television coverage (like the Dick Cavett special shot during the Exile tour), the band hardly made a move without being recorded from the time Satisfaction blew up until the 50th Anniversary pay per view from New Jersey last month. I remember watching TV as a kid playing hooky from school one day as they closed down the Brooklyn Bridge for the band to drive across it and announce a tour, then played on the back of a moving flatbed truck through Manhattan. What a way to find your first real exposure to a band. As I've written this my thoughts on the band have changed. I've come to love albums I used to skip over, like Some Girls, and come to sort of loathe Brian Jones as a person, even though the band wouldn't exist without him and he was a great guitarist. Reading life humanized Keith Richards in a way that didn't damage his otherworldly status as a rock god like I originally thought it might. I like to believe in myth more often than not, and reality intrudes on that too much, but, really, if it was possible, they've only grown in status in my mind and my estimation over the last two months. Most of the research for this series came from the following books: Life, by Keith Richards; Let It Bleed: The Rolling Stones, Altamont, and the End of the Sixties, by Ethan A. Russell; Every Night's a Saturday Night: The Rock 'n' Roll Life of Legendary Sax Man Bobby Keys, by Bobby Keys and Bill Ditenhafer; The True Adventures of the Rolling Stones, by Stanley Booth; Hell's Angel: The Life and Times of Sonny Barger and the Hell's Angels Motorcycle Club by Sonny Barger, Keith Zimmerman and Kent Zimmerman; Being Hal Ashby, by Nick Dawson. NEXT: 50 more years?